" 1928 “LORENZO AND ISABELLA” Sir John Millais PICTORIAL EDUCATION Print | British & Far East Traders Lifestyle & Shopping Blog
Skip to content
Sun. Jun 26th, 2022
AFFILIATE DISCLOSURE NOTICE: DEAR ONLINE VISITOR, Some links on this PAGE are AFFILIATE LINKS which means that, if you choose to make a purchase, WE may earn a small commission at no extra cost to you. WE greatly appreciate your support! BRITISH & FAR EAST TRADERS 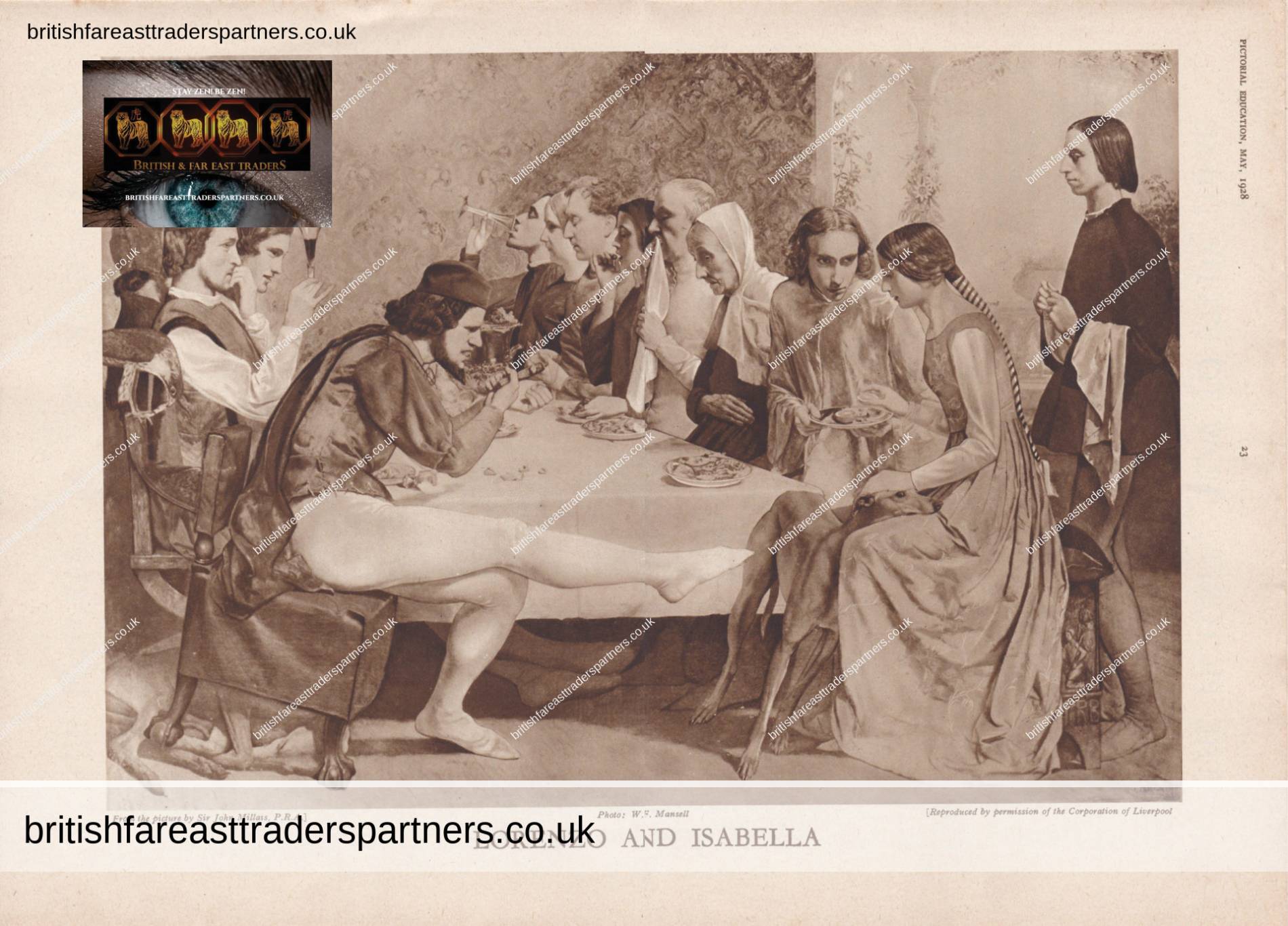 DETAILS:
MEASUREMENTS:
Approx. 15 1/2 inches X 11 1/4 inches
ARTIST:
From the picture by Sir John Millais, P.R.A
Photo: W.F.Mansell
Reproduced by permission of the Corporation of Liverpool
PUBLICATION:
PICTORIAL EDUCATION
MAY 1928
EVANS BROTHERS LTD.
MONTAGUE HOUSE,
RUSSELL SQUARE
LONDON W.C.1
NOTES / OTHER DETAILS:
LORENZO AND ISABELLA
By Sir John Millais, P.R.A (1829-1896)
This picture and the Boyhood of Raleigh
are typical illustrations of Millais’ two strongly contrasting styles.
Lorenzo and Isabella was painted when he was a young man
and a member of the Pre-Raphaelite Brotherhood,
and was influenced considerably by the work
of early Italian painters.
It is very interesting on account of the variety of expressions,
both in the faces and the attitudes of the characters,
portrayed with quiet humour and precise technique.
The composition is apt and clever,
particularly skillful the arrangement of the faces,
so that each one shows clearly.
We can scarcely believe that the same artist could have painted
the two pictures.
Lorenzo and Isabella
lived in Old Florence (ITALY) when that city was in the height of its glory.
Their sad story, told by Boccaccio (1350),
was retold in verse by John Keats in
“Isabella; or the Pot of Basil”.
In the Picture, Isabella is seated by Lorenzo,
“a young palmer in Love’s eye!”
Opposite sit her two brothers, who, jealous of Lorenzo,
“resolved in some forest dim,
To kill Lorenzo, and there bury him.”
The dresses and general setting portray Italian life
in the fourteenth century.
This beautiful ANTIQUE FINE PRINT will look good FRAMED.
AVAILABLE HERE (EBAY.CO.UK)