" ANTIQUE 1928 “INFANTA MARGARITA TERESA” PICTORIAL EDUCATION (LONDON) Print | British & Far East Traders Lifestyle & Shopping Blog
Skip to content
Sun. Jun 26th, 2022
AFFILIATE DISCLOSURE NOTICE: DEAR ONLINE VISITOR, Some links on this PAGE are AFFILIATE LINKS which means that, if you choose to make a purchase, WE may earn a small commission at no extra cost to you. WE greatly appreciate your support! BRITISH & FAR EAST TRADERS 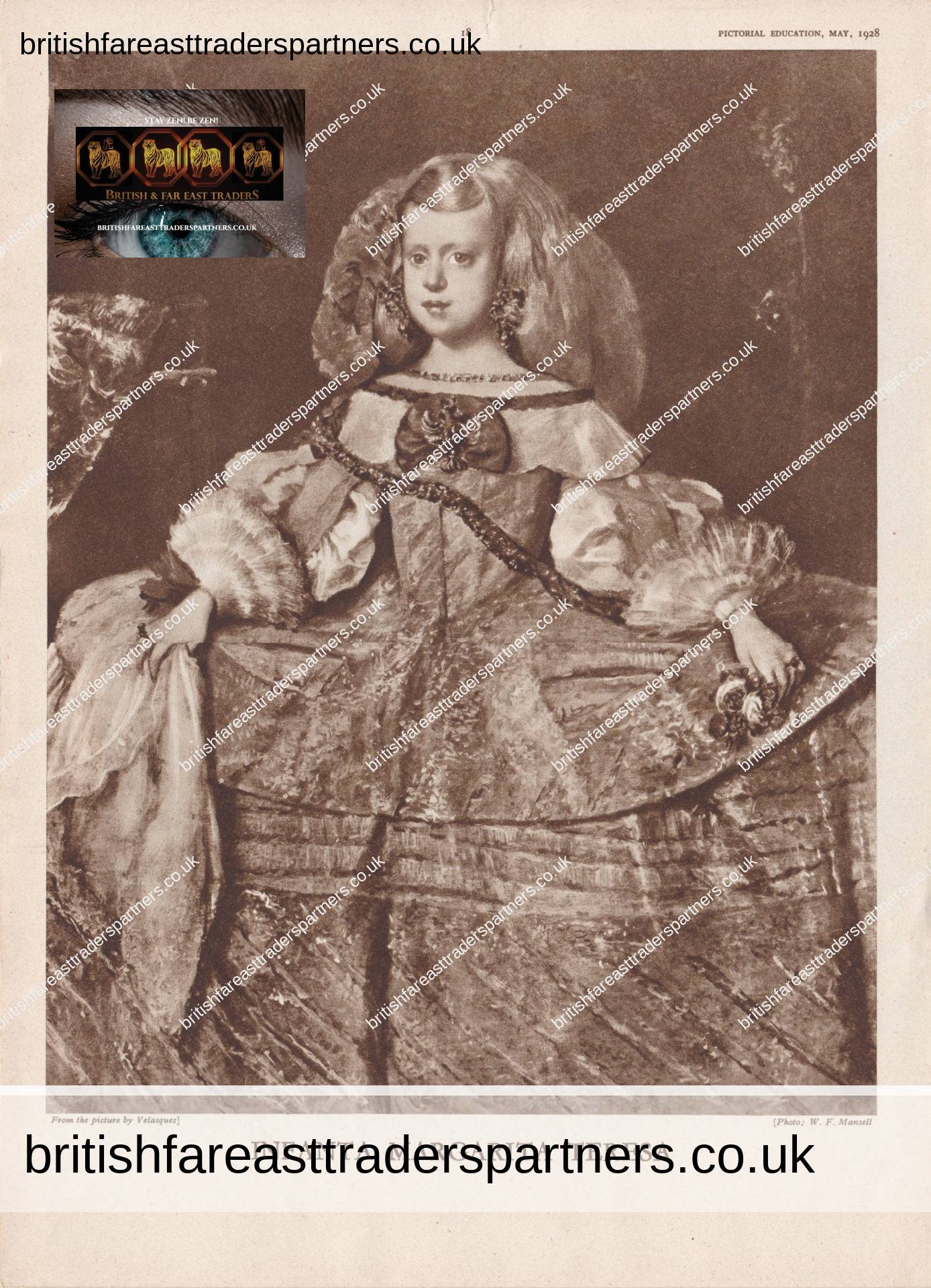 DETAILS:
MEASUREMENTS:
Approx. 11 1/4 inches X 15 1/2 inches
ARTIST:
From the picture by Velasquez
Photo: W.F.Mansell
PUBLICATION:
PICTORIAL EDUCATION
MAY 1928
EVANS BROTHERS LTD.
MONTAGUE HOUSE,
RUSSELL SQUARE
LONDON W.C.1
NOTES / OTHER DETAILS:
INFANTA MARGARITA TERESA
By Velasquez (1599-1660)
VELASQUEZ was undoubtedly the greatest artist
Spain ever produced
and is considered by many to be the greatest painter of all time.
He is certainly unrivaled as a master of draughtsmanship and technique.
Most of his life was spent in the service
of Philip IV of Spain,
as a court painter and master of court ceremonies.
Velasquez excelled all other artists
in his power to suggest physical reality.
He had an extraordinary genius for seeing and portraying things
as they appeared.
This effect was not achieved by a wealth of detail,
but by a selection of the essential characteristics in a figure or a scene.
But his pictures are not lacking in aesthetic qualities:
they are often models of well-knit design
and subtle modulations of tone and colour.
His influence on modern painters,
particularly on Whistler, Manet, and Sargent,
has been profound.
In this picture, Velasquez adopted
the triangular form of Composition–
the most popular form of his time-
which always helps to give an effect of stability.
Without obvious striving,
he used the characteristic feature of the costume
to serve his decorative purpose.
A series of horizontal lines and one great curve
sweep across the picture,
in contrast with a series of almost straight lines,
which carry the observer’s eye
up to the face surmounted by a semi-circular mass of hair.
The arrangement is so important,
that the broad effect of the picture can be expressed in a diagram
consisting of a few straight lines and simple curves.
The Child can best be drawn to interest
by a knowledge of the character of the artist,
his difference from other painters of his day,
and his constant association with the gorgeous Spanish court.
In explaining the underlying construction,
the teacher must be careful not to give the impression
that this was done deliberately as a device,
but rather that it happened in consequence of a
highly cultivated taste.
This beautiful ANTIQUE FINE PRINT will look good FRAMED.
Can be used as a TASTEFUL DECOR or as a teaching aid in FINE ARTS SCHOOL.
AVAILABLE HERE