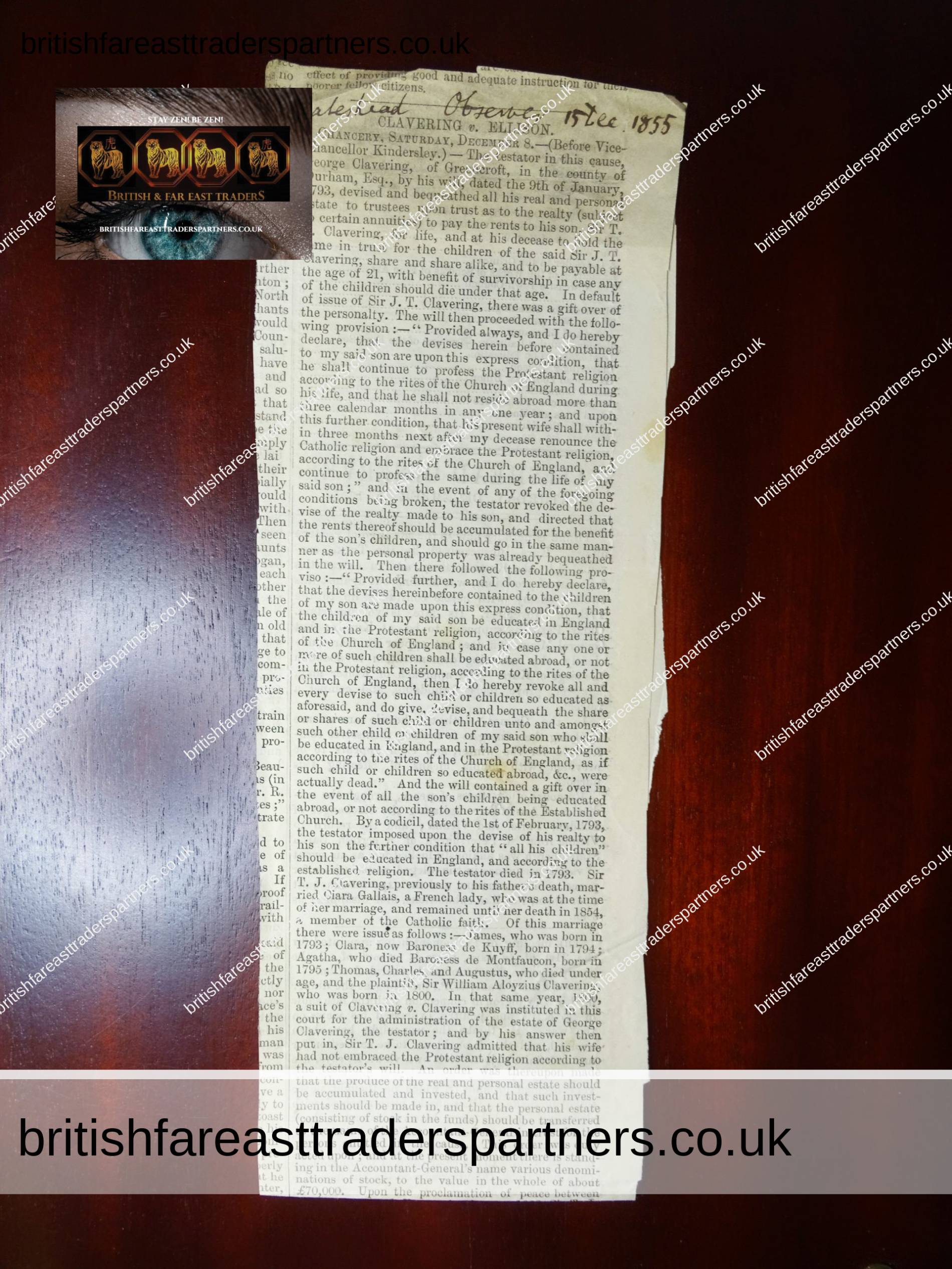 The testator in this cause, George Clavering, of Greencroft,

in the county of Durham, Esq.,

devised and bequeathed all his real and personal estate

to pay the rents to his son, Sir. T.J. Clavering, for life,

and at his decease to hold the same in trust for the children of the said Sir J.T. Cavering,

with benefit of survivorship in case any of the children should die under that age.

In default of issue of Sir J.T. Clavering, there was a gift over of the personalty.

The will then proceeded with the following provision: –

“Provided always, and I do hereby declare,

that the devises herein before contained to my said son

are upon this express condition,

that he shall continue to profess the Protestant religion

according to the rites of the Church of England during his life,

and that he shall not reside abroad

more than three calendar months in any one year;

and upon this further condition,

renounce the Catholic religion and embrace the Protestant religion,

according to the rites of the Church of England,

and continue to profess the same during the life of my said son;”

And in the event of any of the foregoing conditions being broken,

the testator revoked the devise of the realty made to his son,

and directed that the rents thereof should be accumulated for the benefit of the son’s children,

and should go in the same manner as the personal property

was already bequeathed in the will.

Then there followed the following proviso:-

“Provided further, and I do hereby declare,

that the devises hereinbefore contained to the children of my son

are made upon this express condition,

that the children of my said son

be educated in England and in the Protestant religion,

according to the rites of the Church of England,

then I do hereby revoke all and every devise

to such child or children so educated as aforesaid,

and do give, devise, and bequeath the share or shares

of my said son who shall be educated in England,

and in the Protestant religion according to the rites of the Church of England,

as if such child or children so educated abroad, &c were actually dead.”

being educated abroad, or not according to the rites of the Established Church.

the further condition that “all his children” should be educated in England ,

and according to the established religion.

who was at the time of her marriage,

and remained until her death in 1854, a member of the Catholic faith.

Of this marriage, there were issue as follows:

Thomas, Charles, and Augustus, who died under age,

And the plaintiff, Sir William Aloyzius Clavering, who was born in 1800.

a suit of Clavering v. Clavering

was instituted in this court for the administration of the estate of George Clavering,

the testator; and by his answer then put in,

Sir T. J. Clavering admitted that his wife had not embraced

the Protestant religion according to the testator’s will.

should be accumulated and invested,

and that such investments should be made in,

and that the personal estate (consisting of stock in the funds)

for the persons entitled in the cause.

This order was duly acted upon;

and at the present moment there is standing

in the Accountant-General’s name various denominations of stock,

Upon the proclamation of peace between this country and France

in the year 1802, Sir T.J. Clavering and his wife proceeded to that country,

taking with them their four elder children

(the younger of them shortly afterwards died abroad),

leaving the plaintiff and his brother Thomas

who died shortly afterwards) in this country.

In the year 1803 was promulgated by Napoleon I,

the edict whereby all British subjects then in France

were declared prisoners of war,

by virtue of which Sir T.J. Clavering was detained at Verdun and at Paris,

until the year 1814, when he returned to England.

was sent to a French Catholic school,

when he came to England, was sent to Harrow,

and thence to Woolwich, and ultimately became an officer in the army,

the other two children who went abroad with their father and mother,

were sent to the establishment of Madame Campan,

where they remained until 1810.

attended and gave instructions to such of the girls as were Protestants,

and amongst them Clara and Agatha Clavering received instructions.

and were sent to an English school for about a twelvemonth.

Subsequently they both returned to the Continent,

and became the wives of foreignnoblemen as already mentioned,

their marriages being celebrated according to the Catholic church.

James Clavering and Baroness de Montfaucon are both dead,

but their representatitves are parties to the suit.

The plaintiff never went abroad during the period of his education,

which was conducted in the first instance by private tuition,

and afterwards at Eton and Cambridge,

and he was brought up in the Protestant faith

according to the rites of the Church of England.

Under these circumstances the present bill was filed,

claiming the whole of the real estate of George Clavering,

and the entire fund in court, for him,

as the only child of Sir T.J. Clavering who had satisfied the conditions of the testator’s will.

On behalf of the Baroness de Kuyff

and the representatives of the deceased childre

it was contended that the condition of “not being educated abroad”

must not be construed strictly,

and that its true signification was that the children should not be entirely so educated.

Hence it was said that the partial education in England,

which all the children had received, satisfied the condition,

and that the attendance of the Episcopalian clergyman

was a sufficient “bringing up in the Protestant religion,

according to the rites of the Church of England”.

and Mr. Bazalgette were for the plaintiffs.

The following counsel appeared for the defendants:

The Solicitor-General had not concluded his reply when the Court rose. – Daily News.

simply insisted upon the condition as conclusive

in favour of the plaintiff in the events which had happened.

appeared for the devisee of James Clavering,

the deceased brother of the plaintiff,

and contended that the condition was void for uncertainty and repugnancy.

Mr. Rolt and Mr. Dickenson, for a sister of the plaintiff,

argued that any education in England, or in the Protestant faith,

was sufficient to fulfil the condition;

and the codicil must be disregarded,

the whole will being taken together.

The absence from England was, moreover, not a voluntary one.

appeared for the other defendants.

The Solicitor- General was heard in reply on Tuesday.

The Vice-Chancellor said that he thought this case so important,

from the nature of it, that he should reserve his decision for the present. – The Times 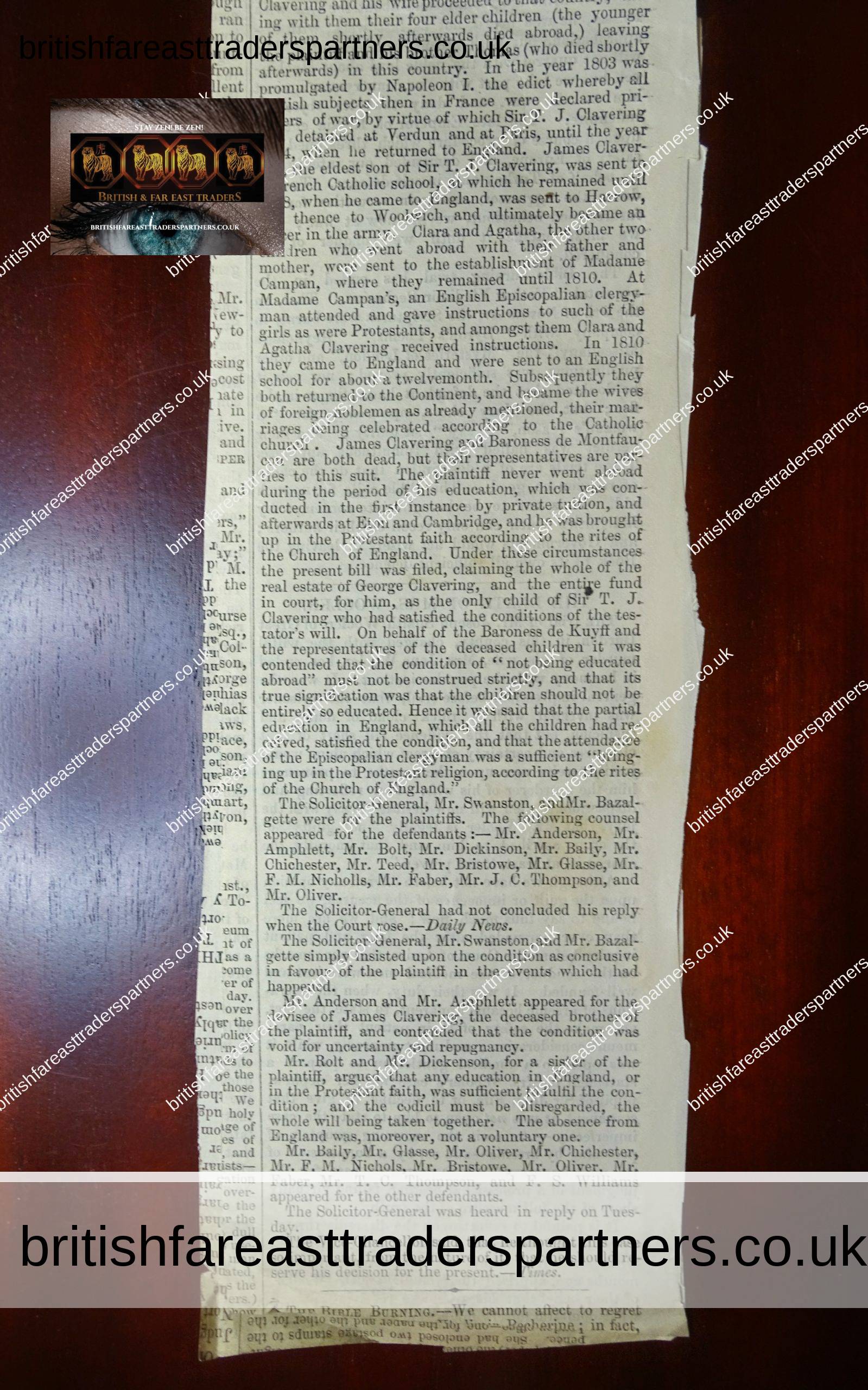