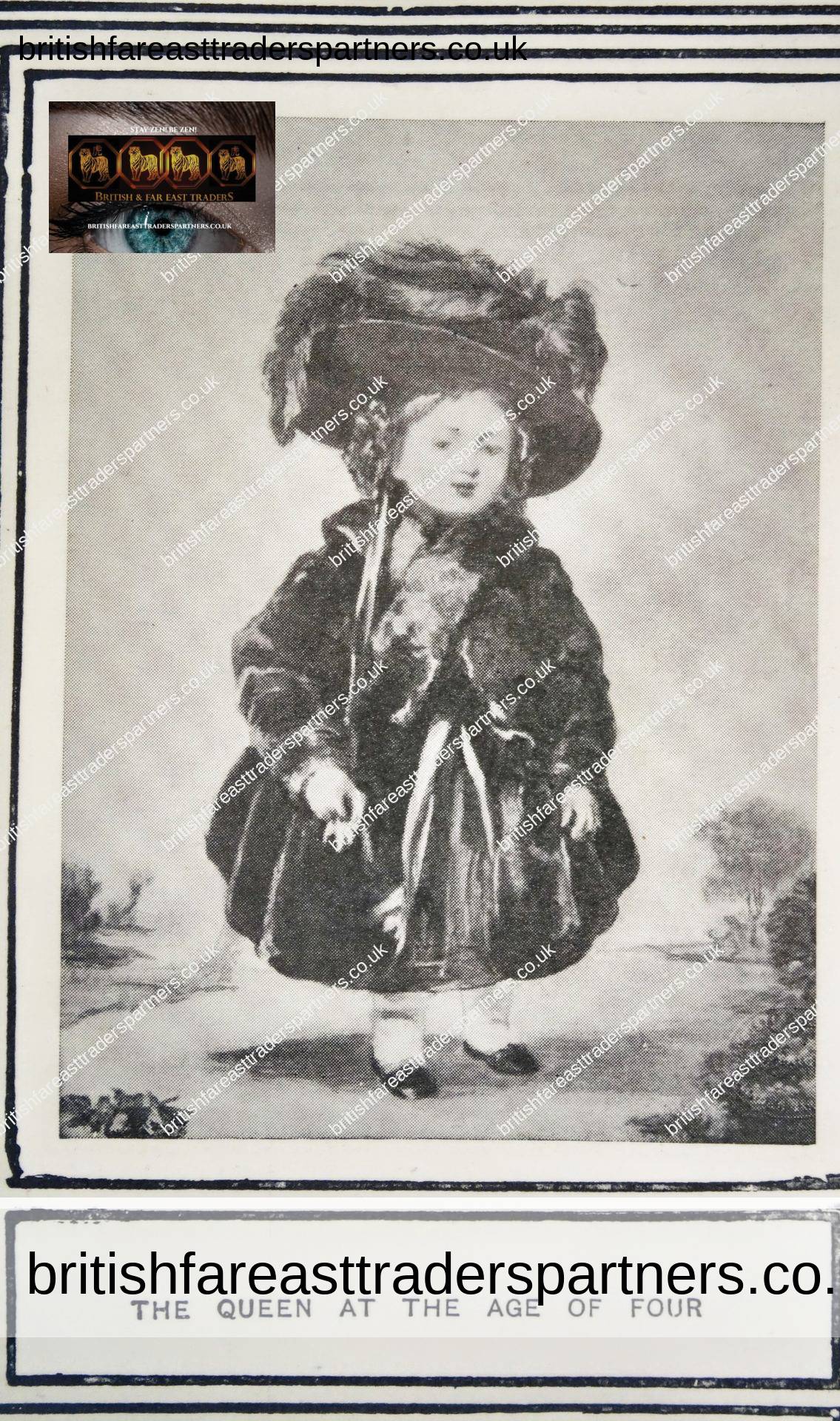 DETAILS:
MEASUREMENTS:
9 7/8 INCHES X 16 7/8 INCHES
A REMINISCENCE OF THE QUEEN’S CHILDHOOD
(BY HER GOVERNESS)
FEATURING:
A LETTER FROM THE QUEEN TO HER UNCLE , 1826
THE QUEEN AT THE AGE OF FOUR
THE QUEEN AT THE AGE OF EIGHT
THE QUEEN AT THE AGE OF ELEVEN
THE QUEEN AT THE AGE OF SIXTEEN
The Baroness Lehzen,
the Queen’s governess,
thus describes the environment of the Princess
in her childhood in Mrs. Oliphant’s Life:
“Our apartments”, she said, “consist of four rooms,
the ante-room, the living room, the bed chamber, the hanging closet.
I sleep with the Princess in one of the rooms
which contains two beautiful large upholstered beds
resembling small houses.
One maid waits on us both.
“The furniture in the rooms is mahogany with gilding,
the sofas and beds are covered with pretty xhintz,
the floor with pretty carpets.
“I had been informed that the whole circle breakfasted at 8:30,
but the Duchess of Kent desired me
to rest myself on the following morning
and to breakfast alone.
Notwithstnading this, I rose early enough,
and about breakfast-time
the Duchess sent to say that she was impatient to see me.
She was standing at the breakfast table,
and is a woman between thirty and forty,
rather short, with brown hair and brown eyes.
Without being beautiful,
she has an expression of extreme goodness.
She said something about being obliged
by my rapid journey,
to which I replied that I had but consulted
my own interests by so coming.
She then gave me her hand, which I kissed,
receiving in return a kiss upon my cheek.
“At breakfast we seated ourselves at a round table.
Soon afterwards the Duke of Sussex arrived.
The Duke speaks German with me,
but the Duchess speaks French.
The latter wishes me to converse in French
with the Princess because my pronunciation
pleases her;
and really, for the most part,
although I am associated with royalty
I cannot call the treatment I receive other than friendly.
“At one o’clock luncheon is served;
at six we dine.
The company at table consists of the
Duke of Sussex, the Duchess,
the lady-in-waiting, the Princess,
the domestic physician, and myself.
“The Duchess sings, draws, and plays well.
She is a most affectionate mother.
I have requested permission to give the Princess
lessons in French and Italian myself;
in other subjects the court chaplain,
painter, and musician will instruct her.
As we did not go to church on Sunday morning
the Duchess read a sermon aloud
and commented on it pleasantly
to her little daughter.
The little Princess is a charming child
and resembles the Princess Charlotte,
so they say.
After dinner we remain together till nine o’clock,
when tea being over I retire with my Princess,
who goes to bed,
and I can then amuse myself”.
A LETTER OF VICTORIA TO HER UNCLE
Tunbridge Wells
16th August 1826
My dear Uncle
I offer you many affectionate congratulations on your birthday-
very many with my best love –
for all your kindness to me,-
and it has been a great pleasure to me,
to be able to write this year,
to my uncle, the King, and to you.
We hope to hear that Brighton does you a great deal of good.
Believe me, my dear Uncle,
your very affectionate Niece
Victoria 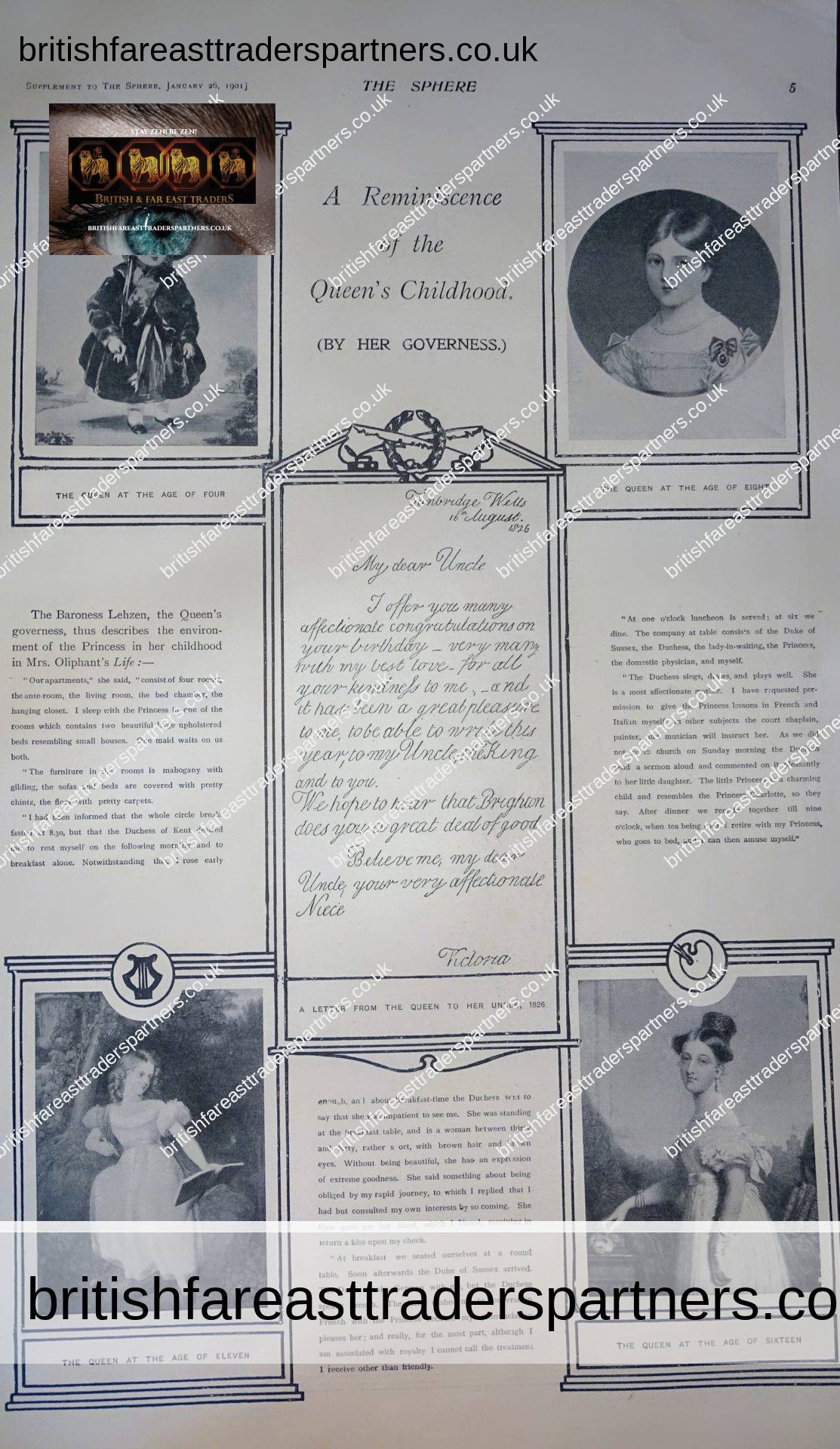