The LOST Age of the DEBUTANTES

In Aid of the maintenance

(Patron: HER MAJESTY THE QUEEN)

The Queen Charlotte’s Ball is an annual British debutante ball.

The ball was founded in 1780 by George III as a birthday celebration in honour of his wife,

Charlotte of Mecklenburg-Strelitz, for whom the ball is named.

The Queen Charlotte’s Ball originally served as a fundraiser

for the Queen Charlotte’s and Chelsea Hospital.

The annual ball continued after Queen Charlotte’s death in 1818,

but was criticised by the British royal family

It was revived in the 21st century by Jenny Hallam-Peel,

a former debutante, who shifted its focus from entering high society

and fundraising for charities.

to a large birthday cake in honour of Queen Charlotte.

The Queen Charlotte’s Ball is named after

a German princess who, as the wife of George III,

was the Queen consort of Great Britain, Ireland, and Hanover.

The first ball was hosted in 1780 by George III

in honour of Queen Charlotte’s birthday.[1][2]

The Queen stood next to a giant birthday cake

and debutantes curtseyed to her.[3]

The ball, which continued to take place annually

in celebration of the queen’s birthday,

became the premier debutante ball of the London Season.[5] 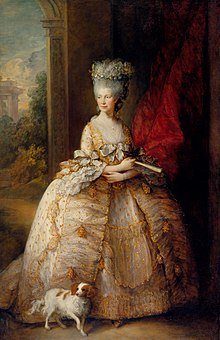 After Queen Charlotte’s death in 1818,

the ball continued to be hosted

by the British sovereign and consort.

were presented as debutantes to the royal court.

After being presented at court,

debutantes were allowed to partake

in all the exclusive social diversions of high society:

and being eligible for marriage.

would curtsey to the reigning sovereign

In the late 1950s the Duke of Edinburgh

referred to the ball as “bloody daft”

and insisted that it no longer be held at Buckingham Palace.[8]

(she is said to have complained that:

“Every tart in London is getting in”),

to sponsor them, as a sponsorship was required in order to participate.[9][10]

she would no longer have debutantes presented at court.

In the 1960s and 1970s the participation in debutante balls

around the United Kingdom dropped,

leading to the Queen Charlotte’s Ball folding in 1976.[3]

The Queen Charlotte’s Ball was revived

in the early 21st century by Jenny Hallam-Peel,

a former debutante, who works as an attorney

and runs a company called The London Season.[11]

and selecting students as debutante recruits.[3]

and fundraising for charities.

While originally exclusive to members

of the British nobility and gentry,

and from foreign countries.

Many debutantes are from Eastern Europe and Asia.[10]

Debutantes are required to be preparing for

or already enrolled at a university.[3]

The debutantes are also required to partake

in the traditional London season,

and the Glyndebourne Festival Opera.[3]

They are trained in etiquette

that involves protocol and diplomacy,

and the orders of precedence in the United Kingdom,

titles and forms of address,

and ranks of the British peerage.[10]

The ball, no longer hosted by the monarch,

is officially hosted by John Seymour, 19th Duke of Somerset,

and Judith-Rose, Duchess of Somerset,

with Princess Katarina of Yugoslavia and

Rather than curtsey to a monarch,

the debutantes curtsey to the birthday cake itself.[6]

Each year one debutante is selected as “Debutante of the Year”

and she cuts the cake with a ceremonial sword.[2]

Since its revival, the ball has been hosted at

The Queen Charlotte’s Ball partnered with

In 2015 Rachel Yeoh and Michelle Yeoh

became the first Malaysians to make their debut

Follow us on SOCIAL MEDIA:
Spread the LOVE with BRITISH & FAR EAST TRADERS and PARTNERS