" 1928 “A LITTLE MOSLEM GIRL OF DELHI” Ewing GALLOWAY PICTORIAL EDUCATION Print | British & Far East Traders Lifestyle & Shopping Blog
Skip to content
Mon. Jun 27th, 2022
AFFILIATE DISCLOSURE NOTICE: DEAR ONLINE VISITOR, Some links on this PAGE are AFFILIATE LINKS which means that, if you choose to make a purchase, WE may earn a small commission at no extra cost to you. WE greatly appreciate your support! BRITISH & FAR EAST TRADERS 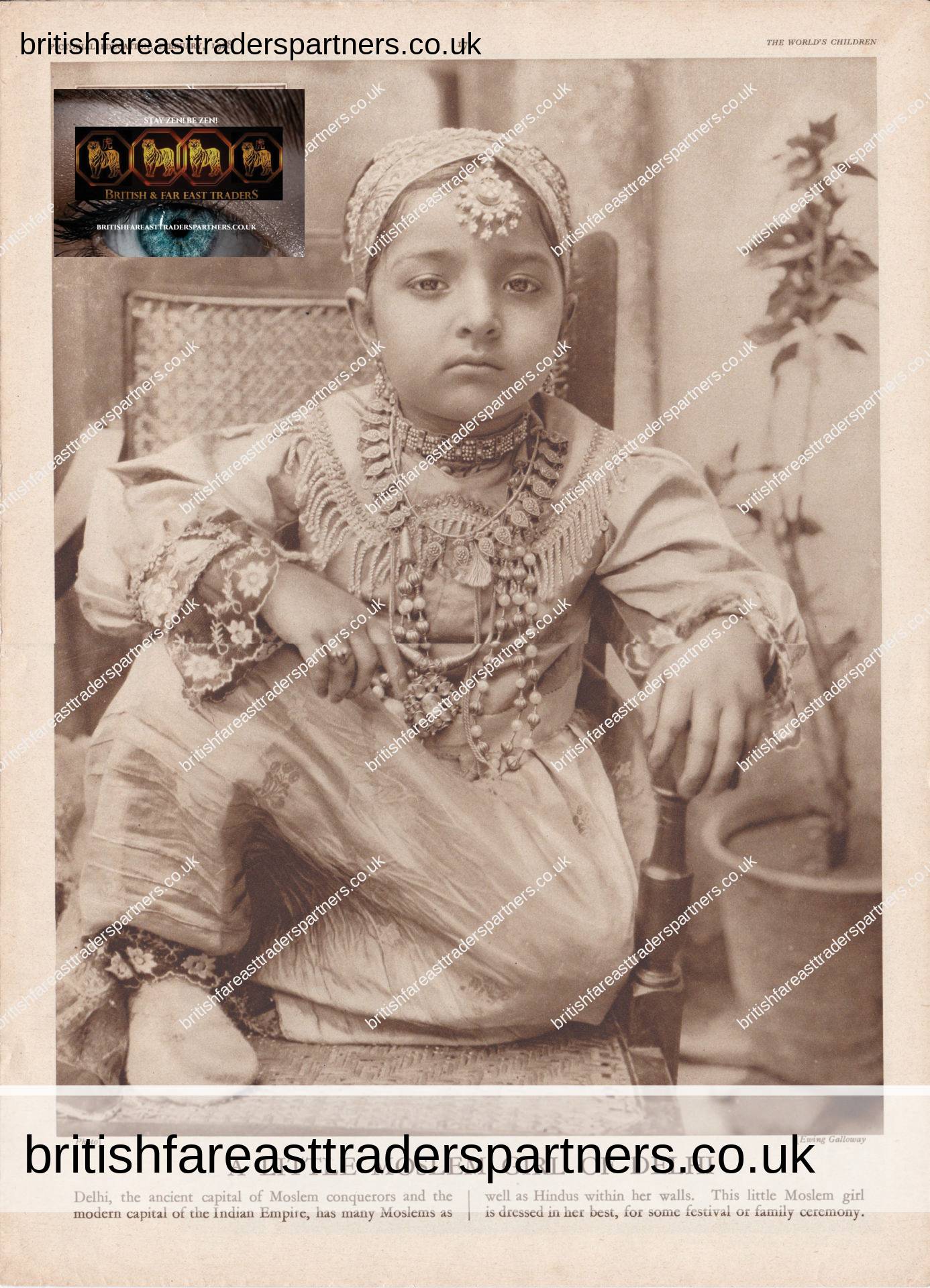 VINTAGE 1928 PRINT
‘A LITTLE MOSLEM GIRL OF DELHI’
PICTORIAL EDUCATION MAGAZINE
ANTIQUARIAN & COLLECTABLES
PAPER & EPHEMERA | ARTS & PRINTS
SOCIETY | LEISURE | LIFESTYLE & CULTURE |
VINTAGE FASHION & BEAUTY |
ISLAMIC | BRITISH | UNITED KINGDOM
DETAILS:
MEASUREMENTS:
Approx. 11 1/4 inches x 15 1/2 inches
ARTIST:
Photo by Ewing Galloway
PUBLICATION:
VOL. II NO. 2
FEBRUARY 1928
PICTORIAL EDUCATION
EVANS BROTHERS LTD.
MONTAGUE HOUSE,
RUSSELL SQUARE
LONDON W.C.1
NOTES / OTHER DETAILS:
A LITTLE MOSLEM GIRL OF DELHI
Delhi,
the ancient capital of Moslem conquerors
and the modern capital of the Indian Empire,
has many Moslems as well as Hindus
within her walls.
This little Moslem girl is dressed in her best,
for some festival or family ceremony.
Delhi, the capital of India,
and the royal seat of Hindu and Moslem Conquerors,
has always been a mighty city.
Its situation between the basins of Indus and Ganges
has a strategic value
that has been recognised by conquerors
and defenders of India throughout the ages.
Within the city
Moslem and Hindu live side by side
with other peoples,
testifying to the rise and fall of empires
and the clash of warring civilisations in ancient days.
The picture is a photographic study
of a little Moslem girl of good family.
She wears a close-fitting silken turban,
a silken tunic richly embroidered
and girt at the waist
into baggy silken trousers
drawn tightly in an anklet of embroidery
at the foot.
She is heavily loaded with gold and silver ornaments,
jewels and rings.
AVAILABLE HERE 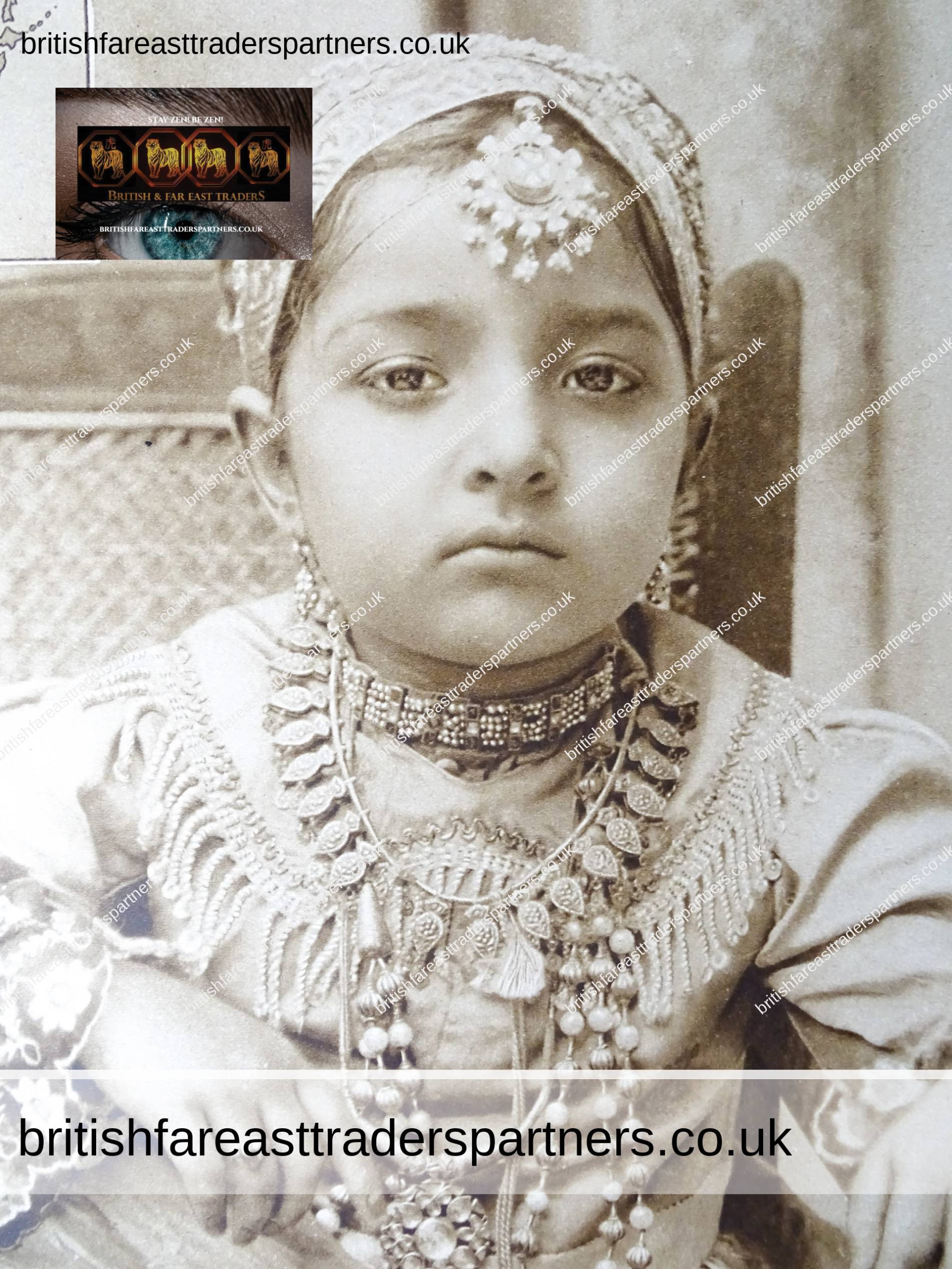