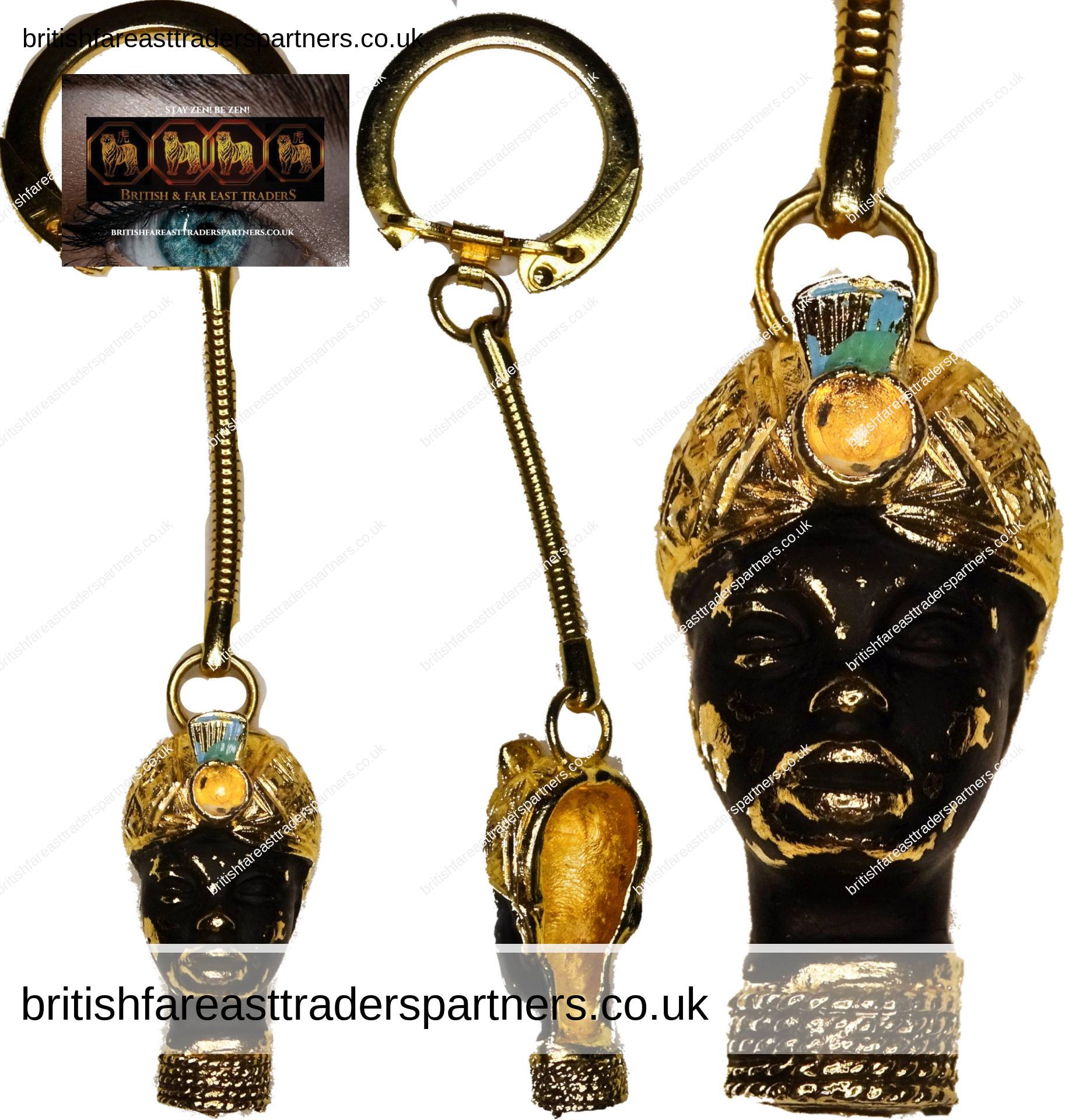 AVAILABLE HERE
DETAILS:
MEASUREMENTS:
Weight: 16 g
Height of the Figural: 3 cm
Total Length: Approx 9.5 cm
NO MAKER’S MARK / SIGNATURE
CONDITION:
GOLD / GOLD CONTENT NOT TESTED
Some of the enameling have worn off
and the Stone on the Turban is missing.
Could easily be replaced by crafting.
DIMENSIONAL Head is hollow and
can be inspected from the back.
GOLD screams EGYPTIAN.
The ANCIENT EGYPTIANS
direct way of communicating with their
POWERFUL Gods.
The KUSHITES of NUBIA became conquerors of Ancient Egypt
when the PHARAOHS’ POWER
of Ancient Egypt has gone into decline
thereby subjecting the EMPIRE into power struggles.
EGYPT though being conquered by several neighbouring
countries end up conquering its conquerors
by the SEDUCTIVE & INTOXICATING
CUSTOMS & CULTURE
of a FASCINATING COUNTRY.
Please watch Dr. Joan Fletcher’s DOCUMENTARY
of IMMORTAL EGYPT to fully appreciate
the power of this EPIC CULTURE of 3000 Years.

The prehistory of Nubia dates to the Paleolithic around 300,000 years ago.

By about 6000 BC, peoples in the region had developed an agricultural economy.

They began using a system of writing relatively late[according to whom?] in their history,

when they adopted the Egyptian hieroglyphic system.

Ancient history in Nubia is categorized according to the following periods:[17]

The linguistic affinities of early Nubian cultures are uncertain.

Some research has suggested that the early inhabitants of the Nubia region,

during the C-Group and Kerma cultures were speakers of languages

belonging to the Berber and Cushitic branches respectively,

of the Afroasiatic family.

that the people of the Kerma culture

and that the peoples of the C-Group culture

They were succeeded by the first Nubian language speakers,

whose tongues belonged to another branch of Eastern Sudanic languages

Although Egypt and Nubia have a shared pre-dynastic and pharaonic history,

the two histories diverge with the fall of Ancient Egypt

and the conquest of Egypt by Alexander the Great in 332 BC.[7]

At this point, the area of land between the 1st and the 6th cataract

of the Nile became known as Nubia.

Egypt was conquered first by the Persians

and named the Satrapy (Province) of Mudriya,

and two centuries later by the Greeks and then the Romans.

During the latter period, however,

the Kushites formed the kingdom of Meroë,

which was ruled by a series of legendary Candaces or Queens.

Mythically, the Candace of Meroë was able to intimidate Alexander the Great

into retreat with a great army of elephants,

while historical documents suggest that the Nubians

resulting in a favorable peace treaty for Meroë.[25]

The kingdom of Meroë also defeated the Persians,

on three different occasions resulting in the 600 year peace treaty of Baqt,

the longest lasting treaty in history.[26]

resulting in full Islamization and reunification

with Egypt under the Ottoman Empire,

After the 1956 independence of Sudan from Egypt,

between Southern Egypt and Northern Sudan.

Eastern Sudanic languages that is part of the Nilo-Saharan family.

The Old Nubian language is attested from the 8th century,

and is the oldest recorded language of Africa

outside of the Afroasiatic family.

It was the language of the Noba nomads

who occupied the Nile between the First and Third Cataracts

and also of the Makorae nomads who occupied the land

between the Third and Fourth Cataracts,

following the collapse of the Kingdom of Kush

sometime in the fourth century.

The Makorae were a separate tribe who eventually conquered

or inherited the lands of the Noba:

they established a Byzantine-influenced state called the Makuria,

which administered the Noba lands separately as the eparchy of Nobatia.

Nobadia was converted to Miaphysitism by the Orthodox priest Julian

and Longinus of Constantinople,

and thereafter received its bishops from the

Pope of the Coptic Orthodox Church of Alexandria.

with varied agriculture and landscapes.

The Nile river and its valley were found

in the north and central parts of Nubia,

The western Sudan had a mixture of peasant agriculture and nomadism.

with a few areas of irrigation and agriculture.

Finally, there was the fertile pastoral region of the south,

Nubia was dominated by kings

from clans that controlled the gold mines.

Trade in exotic goods from other parts of Africa