" ANTIQUE 1927 “AFTER SEDGEMOOR 1685 E. BUNDY” PICTORIAL EDUCATION (LONDON) Print | British & Far East Traders Lifestyle & Shopping Blog
Skip to content
Sun. Jun 26th, 2022
AFFILIATE DISCLOSURE NOTICE: DEAR ONLINE VISITOR, Some links on this PAGE are AFFILIATE LINKS which means that, if you choose to make a purchase, WE may earn a small commission at no extra cost to you. WE greatly appreciate your support! BRITISH & FAR EAST TRADERS 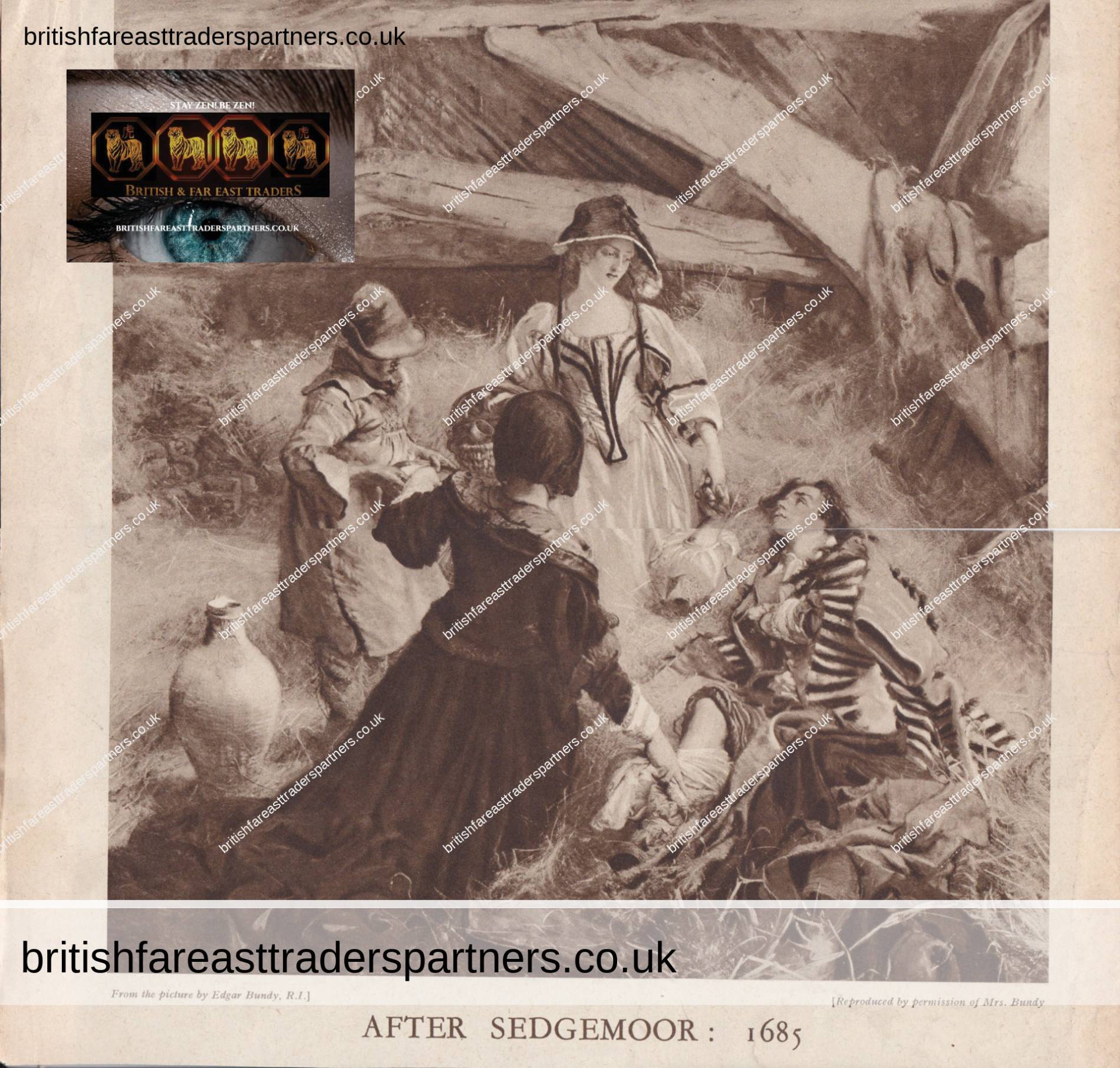 ‘AFTER SEDGEMOOR 1685 BY EDGAR BUNDY’

DETAILS:
MEASUREMENTS:
Approx. 11 1/4 inches X 11 inches
ARTIST:
From the picture by Edgar Bundy, R.I.
Reproduced by permission of Mrs. Bundy
PUBLICATION:
PICTORIAL EDUCATION
MAY 1927
EVANS BROTHERS LTD.
MONTAGUE HOUSE,
RUSSELL SQUARE
LONDON W.C.1
NOTES / OTHER DETAILS:
AFTER SEDGEMOOR: 1685
When James II became king in 1685,
the Duke of Monmouth,
who thought he had a better title to the crown,
landed at Lyme and raised the West Country in rebellion.
But Parliament proceeded against him by Act of Attainder
and the King himself led an army into the West to subdue him.
While James II’s forces lay camped on Sedgemoor in Somerset,
Monmouth attempted a surprise but failed.
His untrained men fought bravely,
but soon were forced to flee,
and seek safe hiding-places from their pursuers.
The Picture shows one of the fugitives
in his hiding-place in the barn of sympathisers with Monmouth’s cause.
The lady of the house in binding up his wounds,
her daughter looks sympathetically at the wounded man,
holding his hand the while,
and the farm boy in smock frock holds water in a basin,
for washing the wound.
Notice the inside of the barn and the great wooden beams
supporting the roof.
This beautiful ANTIQUE FINE PRINT will look good FRAMED.
Can be used as a TASTEFUL DECOR or
as a teaching aid in FINE ARTS SCHOOL.
AVAILABLE HERE (EBAY.CO.UK)