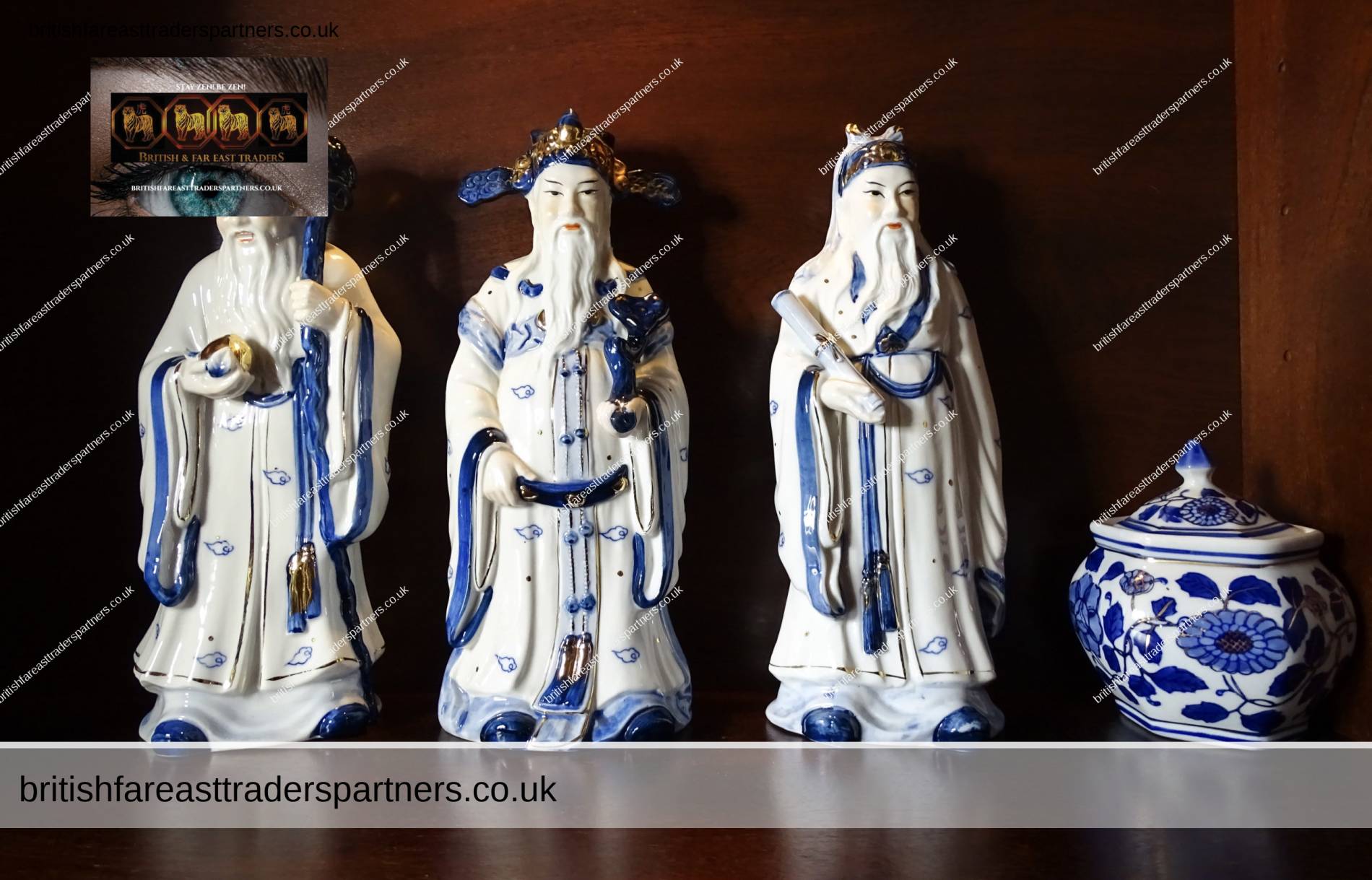 ATTRIBUTES OF A GOOD LIFE.

are also the embodiments of Fortune (Fu), presiding over plant Jupiter,

and Longevity (Shou), presiding over Canopus.

They have emerged from Chinese folk religion.

Their iconic representation as three, old, bearded, wise men dates back to the Ming dynasty,[1]

when the gods of the three stars were represented in human form for the first time.

They are sometimes identified with other deities of the Chinese religion or of Taoism.

The term is commonly used in Chinese culture

to denote the three attributes of a good life.

and ancestral shrines, in nearly every Chinese home

and many Chinese-owned shops on small altars with a glass of water,

an orange or other auspicious offerings,

Traditionally, they are arranged right to left

(so Shou is on the left of the viewer, Lu in the middle, and Fu on the far right),

just as Chinese characters are traditionally written from right to left.[2]

The star of Fu (福), Fuxing 福星, refers to the planet Jupiter.

In traditional astrology, the planet Jupiter was believed to be auspicious.

Alternatively, according to a Taoist myth of the Ming dynasty,

the Fu star is associated with Yang Cheng (楊成)[3],

a governor of Daozhou in Tang Dynasty.

Yang Cheng risked his life by writing a memorial

to the emperor to save the people from presenting dwarf slaves

as the special tribute to the imperial court.

After his death, the people built a temple to commemorate him,

and over time he came to be considered the personification of good fortune.

He is generally depicted in scholar’s dress,

holding a scroll, on which is sometimes written the character “Fu”.

He may also be seen holding a child, or surrounded by children.

He is sometimes conflated with Caishen, the “Wealth God”.

the sixth star in the Wenchang cluster, and like the Fu star came to be personified.[citation needed]

The Lu star is believed to be Zhang Xian who lived during the Later Shu dynasty.

The word lu specifically refers to the salary of a government official.

As such, the Lu star is the star of prosperity, rank, and influence.

from the other two as the deity dictating one’s success in the imperial examinations,

and therefore success in the imperial bureaucracy.

The Lu star is usually depicted in the dress of a mandarin.

the star of the south pole in Chinese astronomy,

and is believed to control the life spans of mortals.

According to legend, he was carried in his mother’s womb for ten years

before being born, and was already an old man when delivered.

He is recognized by his high, domed forehead

and the peach which he carries as a symbol of immortality.

The longevity god is usually shown smiling and friendly,

and he may sometimes be carrying a gourd filled with the elixir of life.

He is sometimes conflated with Laozi

and corresponding gods of Taoist theology.

VINTAGE POSTCARD STORIES: The Weather is Still Glorious in Corfu, Greece- Written on 20th May 1978

VINTAGE By Royal Appointment Raphael Tuck & Sons ART PUBLISHERS FOR THEIR MAJESTIES THE KING AND QUEEN A Happy New Year OILETTE Postcard No. 9609 “FOR AULD LANG SYNE” Printed in England