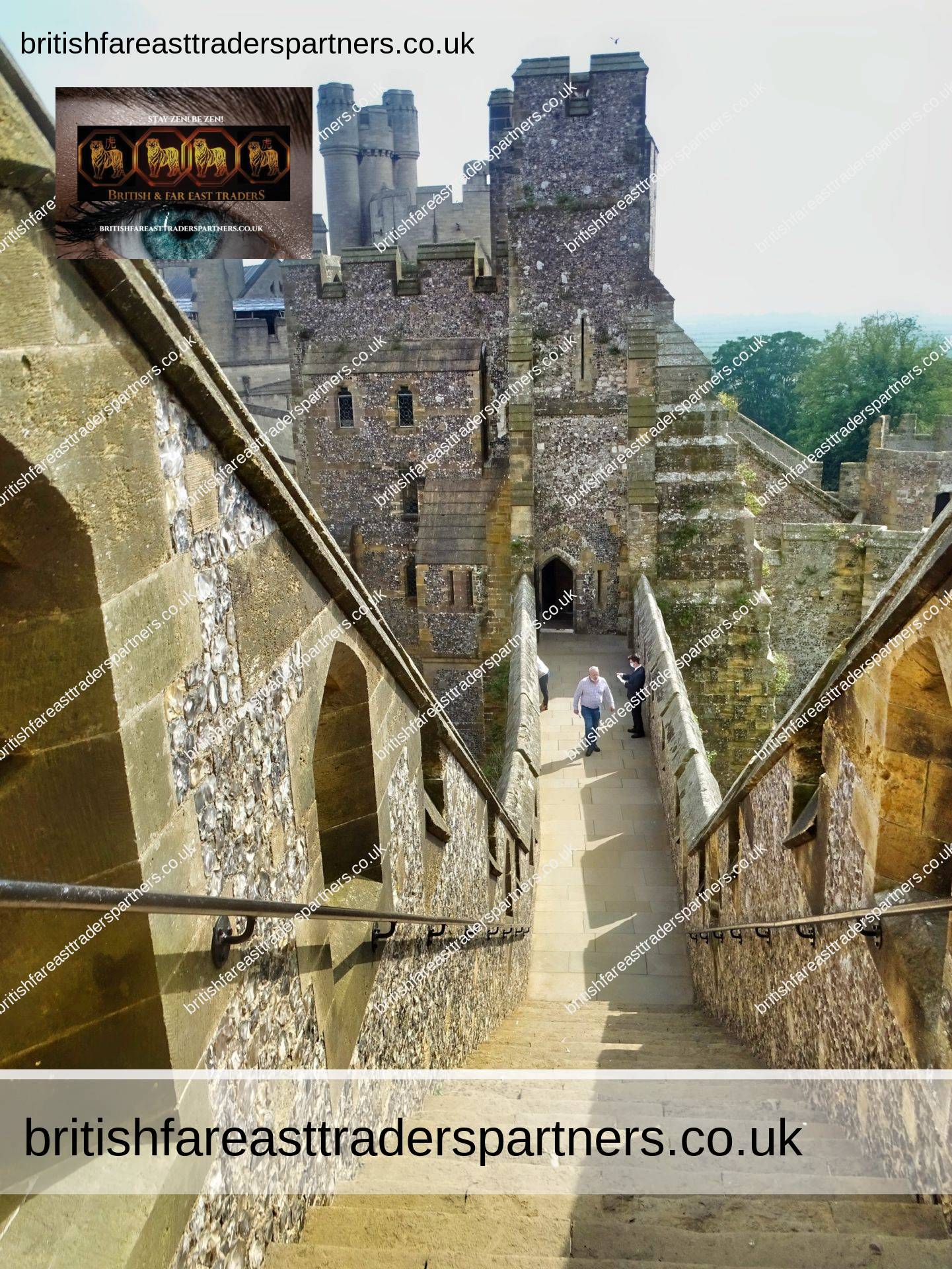 DAYS OUT IN UNITED KINGDOM:

PLACES OF INTEREST in

A SERIES OF PHOTOGRAPHIC BLOG: 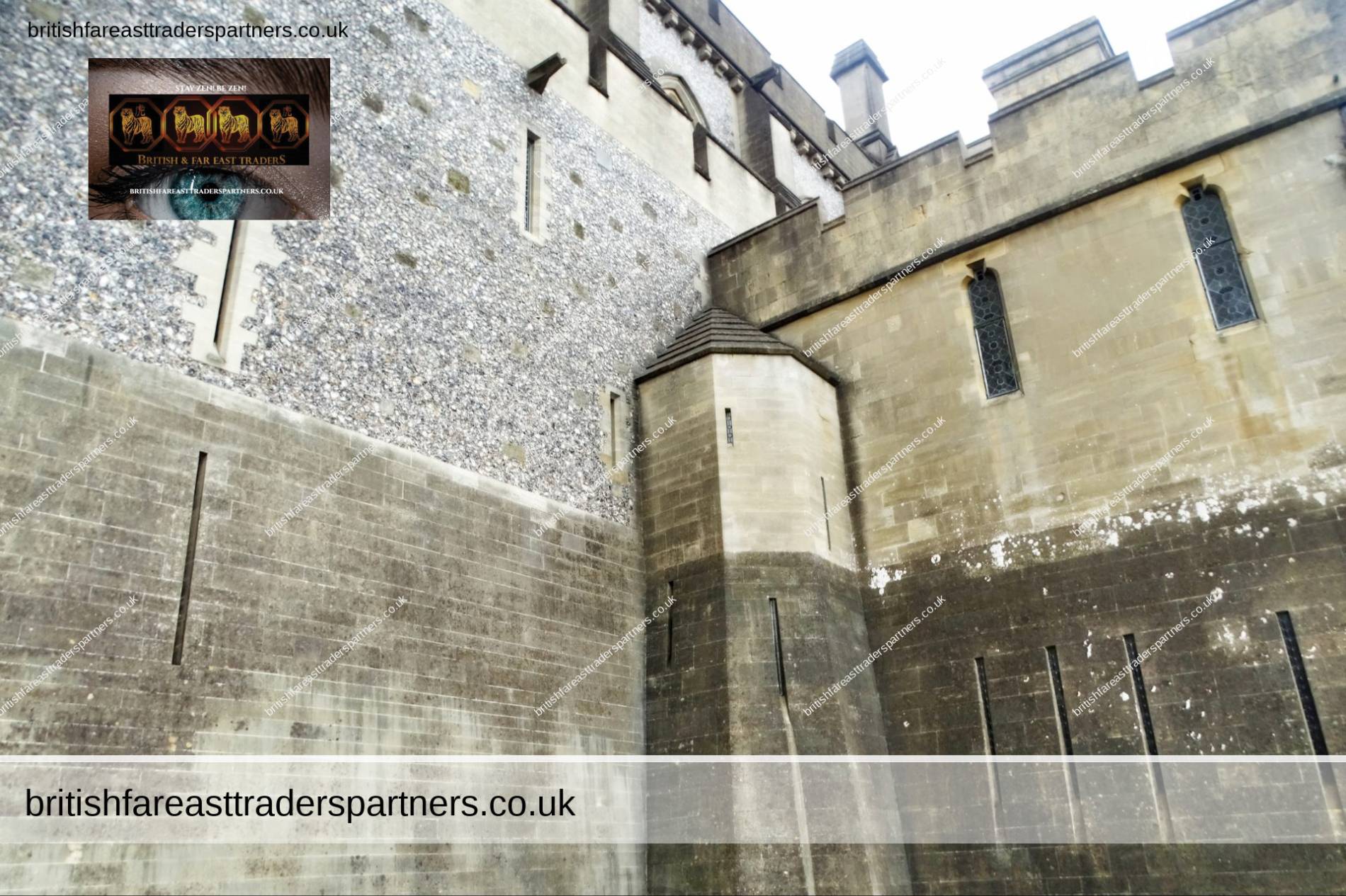 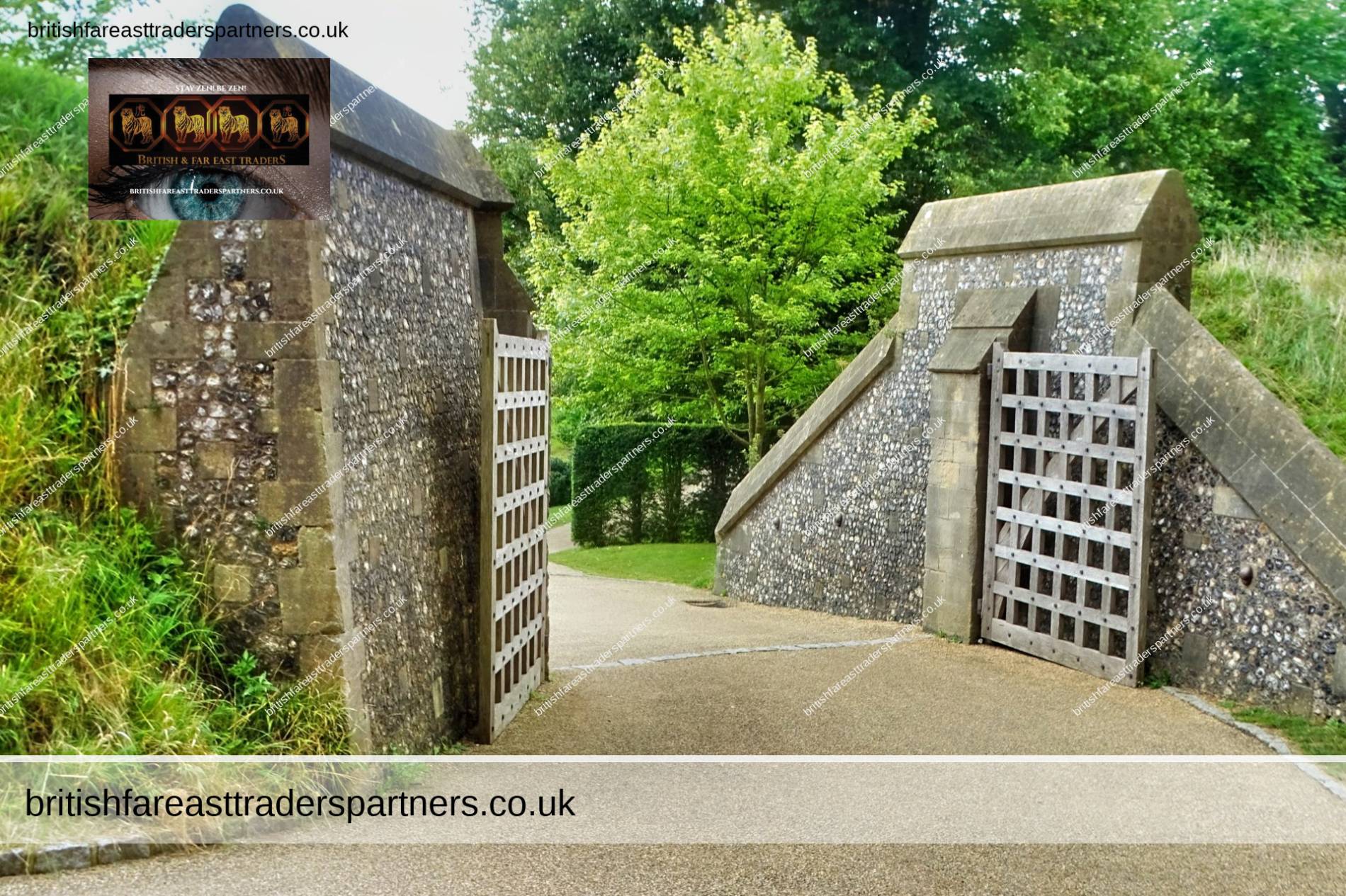 WELCOME TO THE GUARD ROOM

With the arrival of Empress Matilda and news that King Stephen was approaching,

the Castle would have been on high alert

and preparations would have been made for an impending siege.

This guard room was perfectly positioned

to protect the stairway to the chapel, portcullis mechanism, battlements,

and the well- the only water supply for the Keep.

The guards would have barred and blocked the lower door to this tower,

bracing it with wooden beams.

If the enemy breached the cramped stairway,

the fighting would have been brutal and savage

with close combat weapons such as knives, clubs and axes.

However, the stairway itself is cleverly designed to help the defenders.

to those defending from above

in the larger outer curve of the stairway.

The enemy advancing from below

would have their fighting arm restricted by the tight inner curve.

in the hope assistance would come for the defenders in the event of a breach.

WHAT CAN YOU SEE HERE?

There is a rack for weapons more suited to closer combat

and defense of the stairwell.

The shield bears the colours of William de Albini from the siege of 1139.

This keep would have been the last refuge of the defenders

should the walls or gate be breached

so you can see barrels for storing food supplies.

There is a basket of rocks to hurl down on attackers below.

Hot sand could also have been used.

with cats for catching mice and dogs or falcons for hunting.

The cat on the barrel takes a well-earned rest from duty. 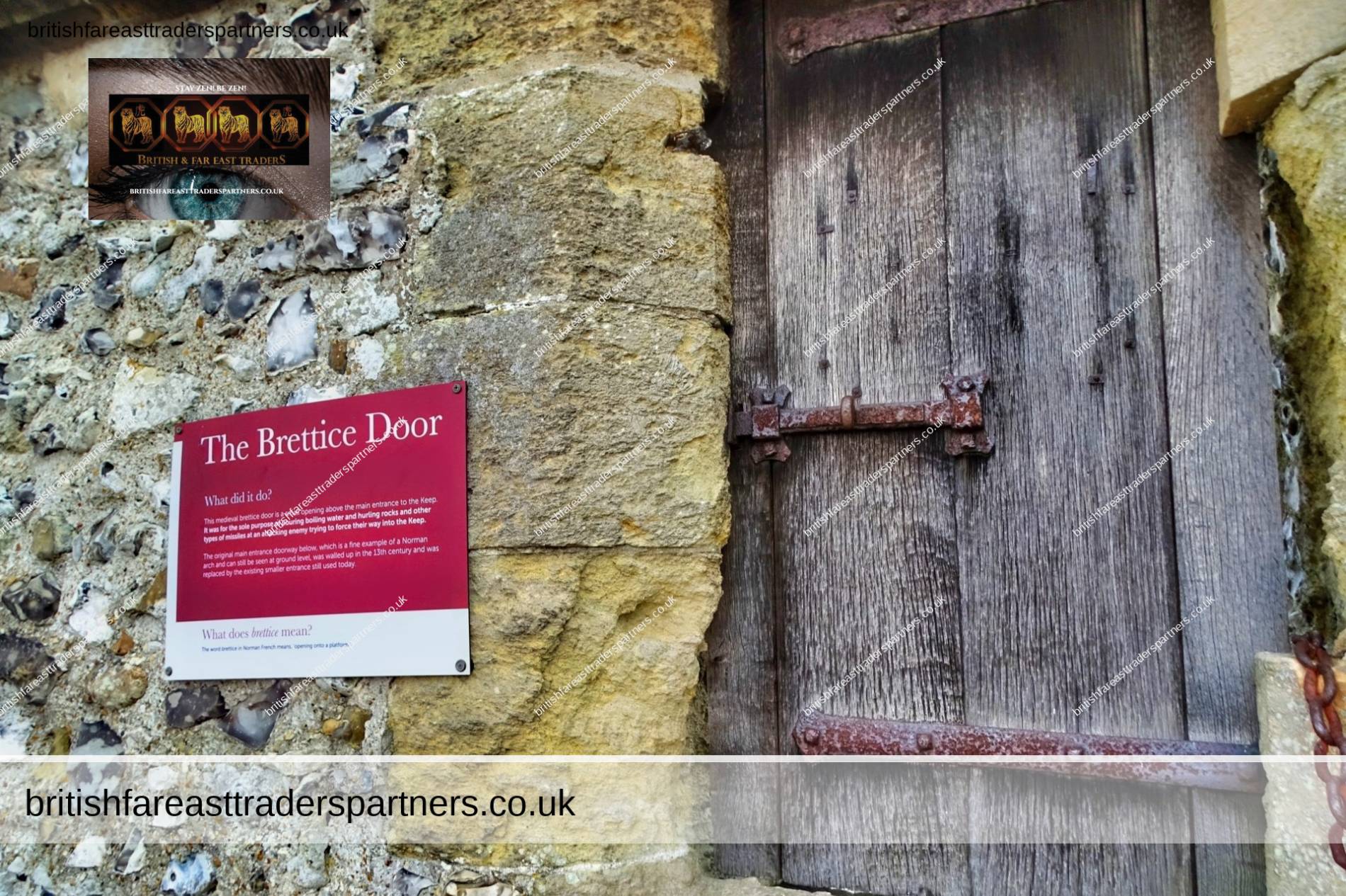 WHAT DID IT DO?

This medieval brettice door is a small opening

above the main entrance to the Keep.

It was for the sole purpose of pouring boiling water

and hurling rocks and other types of missiles

at an attacking enemy trying to force their way into the Keep.

The original main entrance doorway below,

which is a fine example of a Norman arch

and can still be seen at ground level,

was walled up in the 13th century

and was replaced by the existing smaller entrance still used today.

The word brettice in Norman French means ‘opening onto a platform’. WHAT CAN YOU SEE?

Looking into the town of Arundel,

you can see the Town Hall,

with two square turrets and a flagpole;

It is used to house the town jail and courthouse.

which is uniquely joined with the Castle’s Catholic Fitzalan Chapel,

the main window of which can easily be seen.

The Fitzalan Chapel can be visited on your Castle ticket

and St. Nicholas’ Church is also open to the public,

Behind this, the huge church is the Cathedral of Our Lady and St Philip Howard,

seat of the Roman Catholic Diocese of Arundel and Brighton

this is also open to the public.

In the middle distance,

you can see the River Arun running away to the sea.

Its mouth is at Littlehampton, over to the left, about 5 miles away,

and behind the obvious blue/green round tower (an old gasometer).

CAN YOU SEE THE SEA?

Look carefully and you can see the sea running in a strip across the horizon. 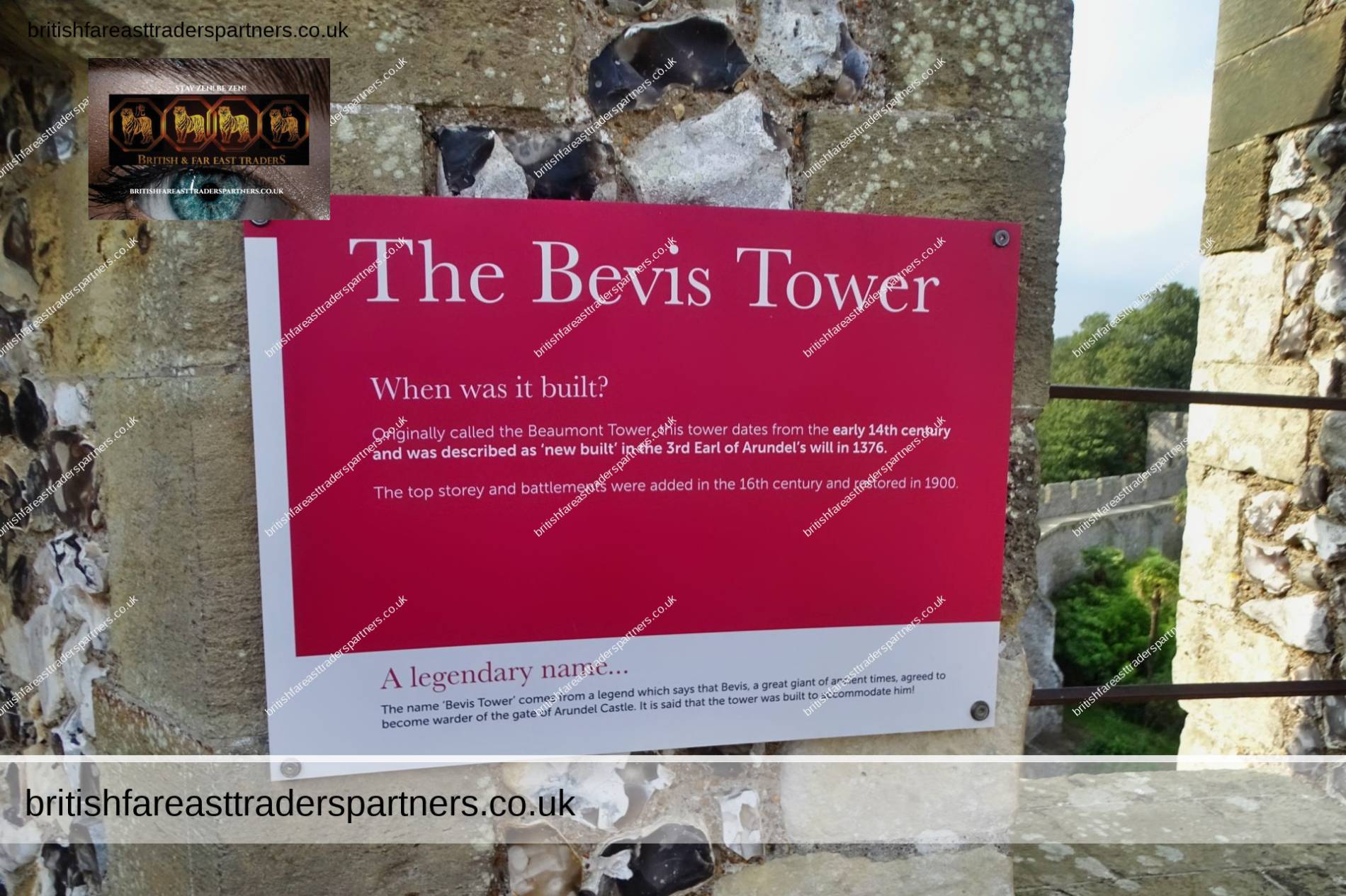 WHEN WAS IT BUILT?

this tower dates from the early 14th Century

The top storey and battlements were added in the 16th century and restored in 1900.

The name ‘Bevis Tower’ comes from a legend

which says that Bevis, a great giant of ancient times,

agreed to become warder of the gate of Arundel Castle.

It is said that the tower was built to accommodate him! 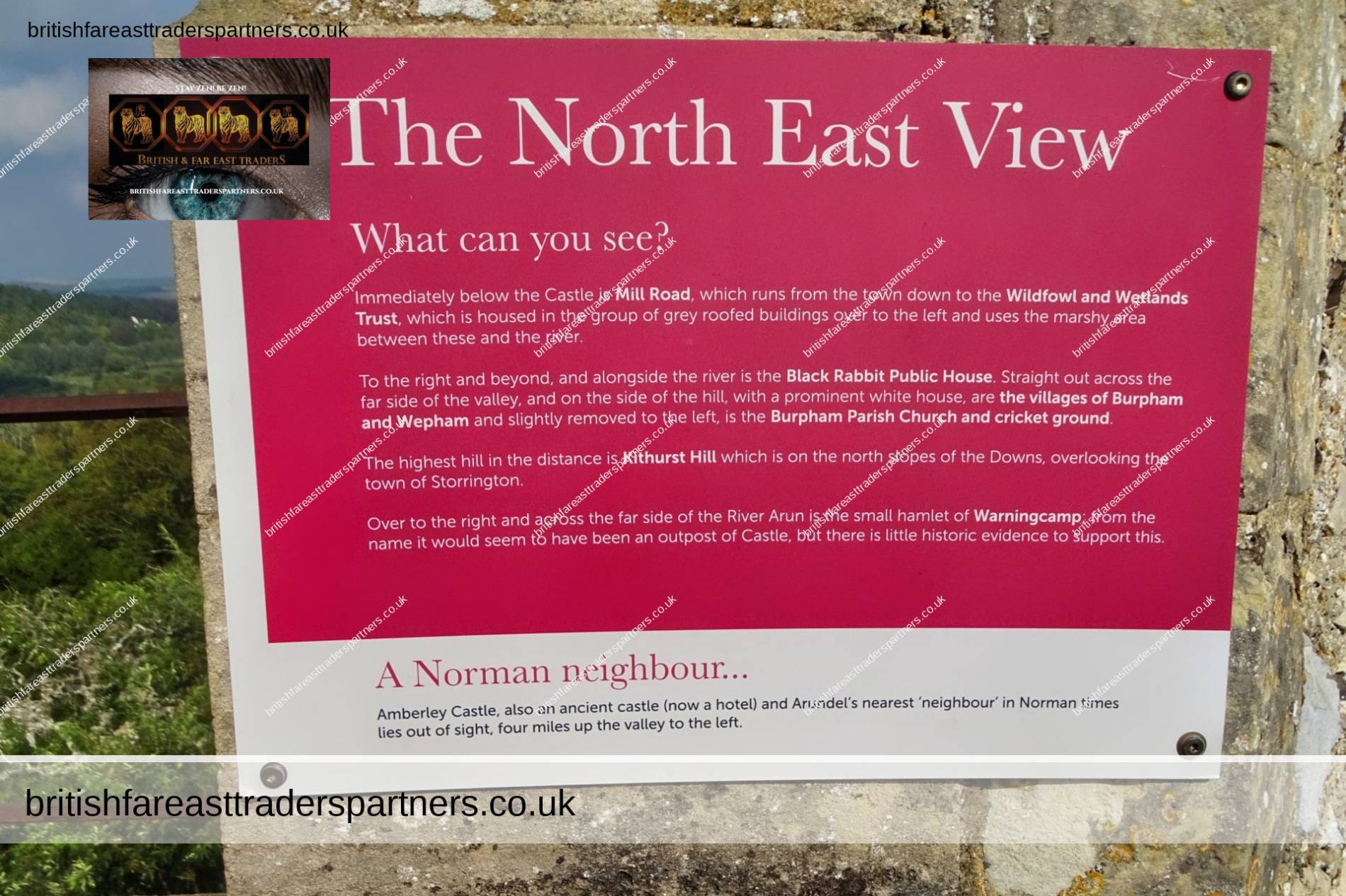 WHAT CAN YOU SEE?

Immediately below the Castle is Mill Road,

which runs from the town down to the Wildfowl and Wetlands Trust,

which is housed in the group of grey roofed buildings

over to the left and uses the marshy area between these and the river.

To the right and beyond, and alongside is the Black Rabbit Public House.

Straight out across the far side of the valley,

and on the side of the hill,

with a prominent white house,

are the villages of Burpham and Wepham

and slightly removed to the left,

is the Burpham Parish Church and cricket ground.

The highest hill in the distance is Kithurst Hill

which is on the north slopes of the Downs,

overlooking the town of Storrington.

is the small hamlet of Warningcamp;

from the name it would seem to have been an outpost of Castle,

but there is little historic evidence to support this.

and Arundel’s nearest ‘neighbour’ in Norman times lies out of sight,

four miles up the valley to the left. 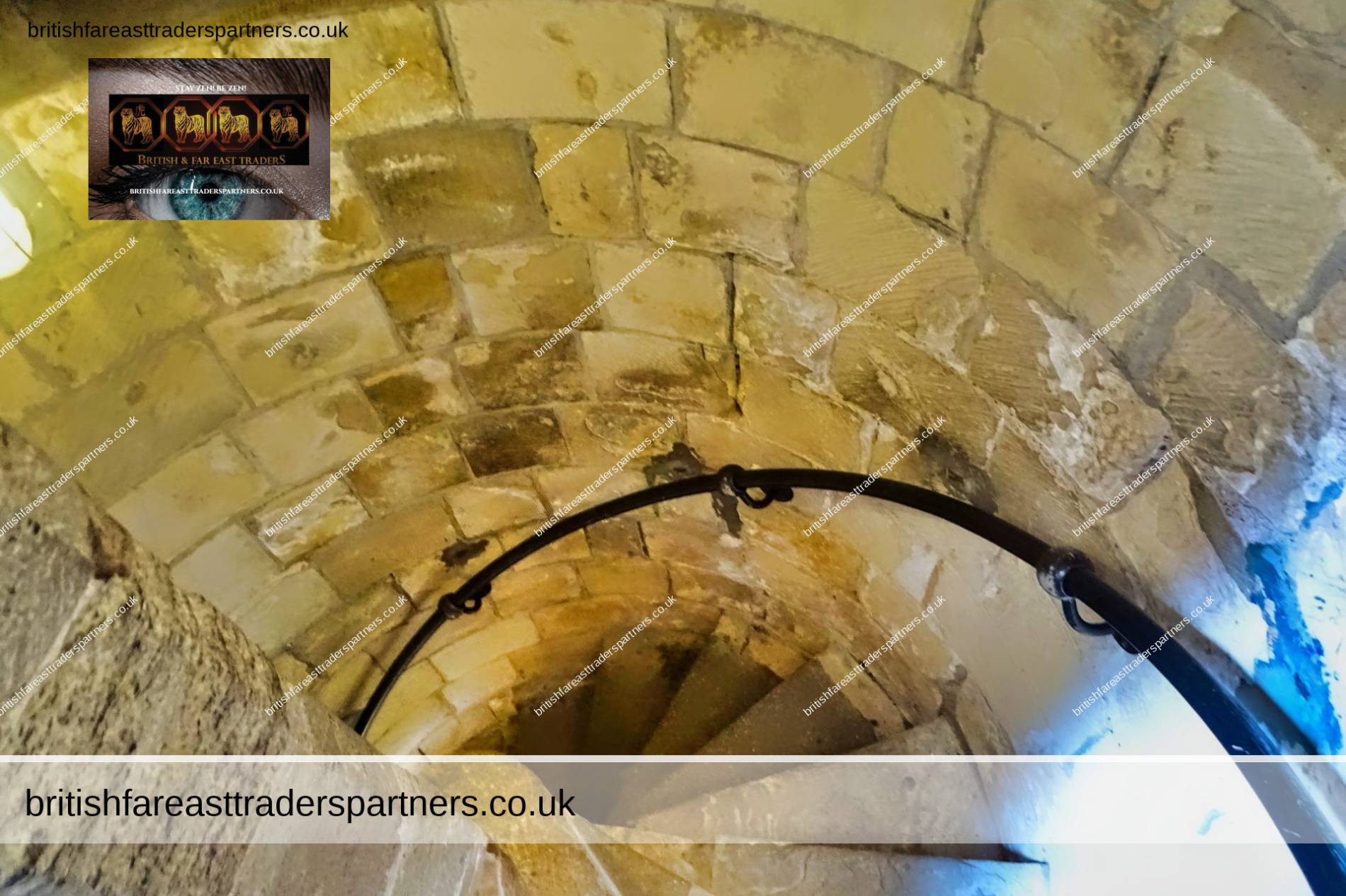 (AT THE TOP OF THE TOWER)

ST. MARTIN’S CHAPEL WAS INSTATED IN THE CASTLE KEEP

BUILDER OF THE ORIGINAL KEEP

AND FOUNDER OF THE PRIORY OF ST. NICHOLAS AT ARUNDEL.

HE WAS DEVOTED TO ST. MARTIN

HAVING RESTORED THE BENEDICTINE ABBEY OF ST. MARTIN IN NORMANDY.

BEING BENEFACTORS TO THE SAME ABBEY OF ST. MARTIN

ON THEIR ESTATES IN NORMANDY.

WAS MOST APPROPRIATE FOR BOTH FAMILIES

AS THEY PUT GREAT STOCK IN THIER ABILITY

TO FIGHT AND DEFEND THEMSELVES.

WHO WAS ST. MARTIN?

The son of an officer in the Roman army,

Martin was drafted into the army when he was 15,

serving the cavalry of the Imperial Guard.

His life changed when, riding into a city on an icy winter night,

he saw a naked beggar shivering with cold.

He took off his huge, heavy cavalry cloak

and cut it in half with his sword,

wrapping the beggar in one half.

He later dreamed that the beggar was Jesus Christ and embraced the faith.

After being baptised and leaving the army,

he became the friend of St. Hilary, Bishop of Poitiers

who ordained him a priest.

After several years as a missionary,

he founded probably the first monastery in France at Liguge,

In 1371 he reluctantly agreed to be Bishop of Tours,

founding a school that trained many future leaders of the Church.

He became the first non-martyr to be made a saint

and churches across Europe was dedicated to his name.

He is almost always depicted as a Roman soldier wearing half a cloak. WELCOME TO THE GUARD ROOM

The year is 1102 and Robert de Belleme, Earl of Arundel,

is in rebellion against King Henry.

To quell the rebellion, the King besieged the Castle for three months.

wasn’t present at the Castle throughout the siege,

the Castle only surrendered on condition

that he be allowed safe passage to leave the country

and return to his lands in Normandy.

King Henry seized all that Robert owned in England.

and the Earl was finally arrested in 1113

and placed in custody in Wareham Castle.

He remained imprisoned there until his death in 1130.

WHAT CAN YOU SEE HERE?

You can see the weapons of defenders

displayed here with a weapon rack

There is an arrow basket with short bow arrows and crossbow bolts.

Heraldry was just starting to be used to identify

individuals and their families.

The kite shields are painted in what are believed to be the colours of Belleme.

was available via the River Arun next to the Castle,

the chests would have been used for storing clothes

and equipment and would have been sat on by the rowers. 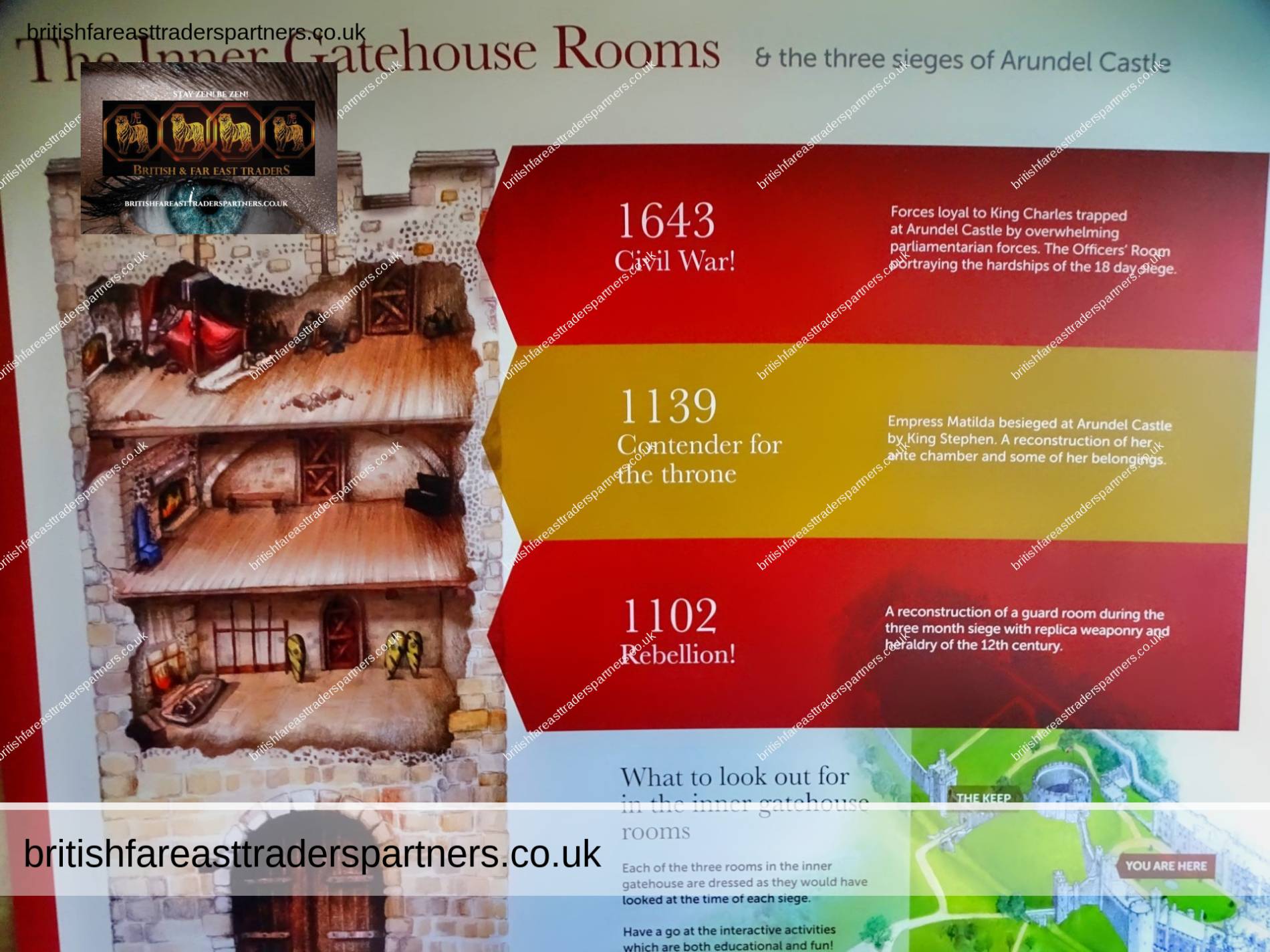 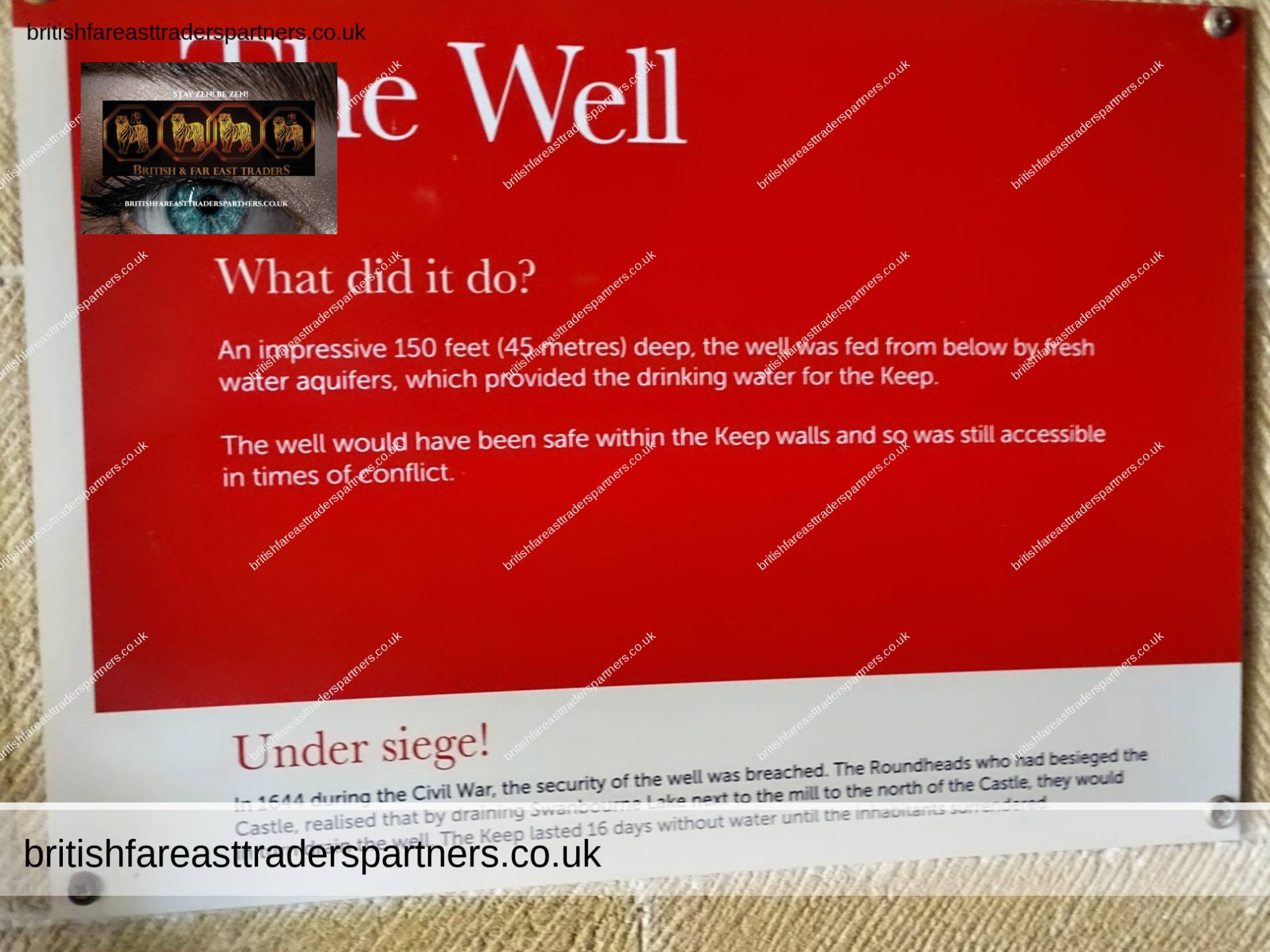